Tai was a 3rd year 3rd year, that unfortunately couldn't come back for his fourth year. He was known for his TipSync's, his flamboyant personality, and his overall passion for TiP.

In his first year at KU, Tai was very apprehensive about TiP, as most first years are. He was afraid of many things: Having a bad roommate, class, RC group, and pretty much everything in general. While he adjusted to the TiP lifestyle, he was still a little cautious going into the third week. After two weeks however, Tai grasped the TiP spirit and was fully engaged in his class and evening activities. One special instance of that was Tai and part of his RC group going to the evening activity "Beach Volleyball" with boxers over their shorts and towels tied around their necks, calling themsleves Batman, Captain America, Superman, and Aquaman (the lamest of the four)

This year going into TiP, Tai was a lot more confident in his entry into the term. He was at one of, if not, the best TiP Campus' and terms: UGA Term II. This year Tai really learned what it meant to be a TiPster, through the dances, theme days and the fourth years at the campus. His roommate this year, Scott Westman, was a lot more suited for Tai's extroverted personality. This TiP experience really made Tai fall in love with TiP and with UGA

After falling in love with UGA Term II, Tai returned, with renewed energy. 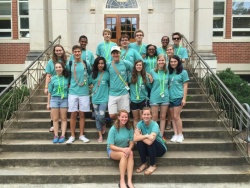 A Sidenote from Tai

Note: Tai was passed down the fourth year hat by Connor Buehler this term, however, since he could not return he passed gave the hat to fellow UGA Tipster Chris Gregoire 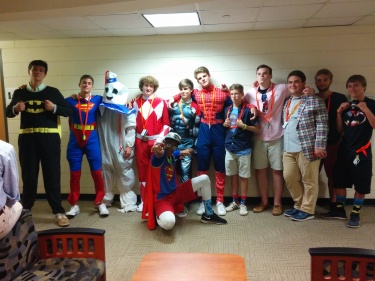 Tai dressed as Superman for the first dance of the term: Superhero's and Supervillan's, with a group of fourth years

One of Tai's main aspects at TiP were his parts in TiPSync competitions, always helping his RC group achieve placings, usually involving him doing some random, arm and leg flailing action while on the ground. Whatever gets the points 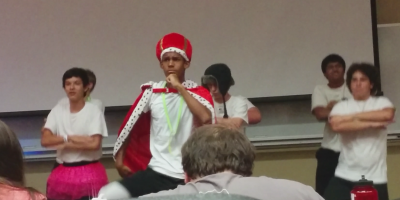 Tai and his RC group in their TiPSync

Tai was notorius for being on teams that place last. Despite that, the teams that he were on generally win the sportsmanship and cheer portion of the competition. During his third year, Tai dressed up in a red king's cloak and crown, and was dubbed the "Fire Lord", and with Isabel Koolik, marched their team into DAWGFest. Tai has always competed in the Jello Snarfle, and always penguin slid in and sprinted back out a matter of seconds. He and the 4th year, Thomas Williford, had a photo finish in 2015. 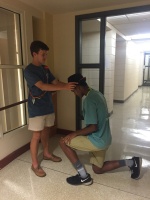