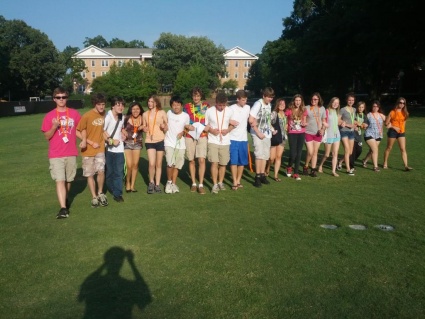 The Cryptobabies was a group of 18 students in the Cryptography, Codebreaking, and the Mathematics of Spying class at UGA Term 2 2012 (although the same class from Term 1 were also called Cryptobabies). Led by TA Anthony Valle and Dr. Crystal Clough, these TIPsters were involved in anything ranging from three-ways to "intentional" frisbee hittings. Oh, and they know your password.

TAnthony Valle - Most likely to be late for his own funeral

Dr. Crystal Clough - Most likely to... withheld for professional reasons

Some class members (Ryan, Jazmine, and Sam) were involved in what was known as the rest of the class as a "three-way relationTIP."

A common method of transportation for the class was the buses do to TAnthony's inherent laziness. Very soon after term started was when he introduced bus surfing to his Cryptobabies. Some of the first to take up the sport were Kayla, Chip, and Michael. Sam, Jazmine, and Anthony soon joined too. Adam made several "attempts" to join but never actually let go of the handles.

The sport resulted in several near falls across the bus, someone almost falling out of the bus, and threats from other TAs as the class spread the sport to others. Once, Super RC Cassidy joined the fun after she came to visit TAnthony.

The class would frequently be held in Aderhold Hall and Poultry Science, using an elementary education classroom and two different upstairs classrooms at Aderhold and Room 319 at Po-po Sci-sci. They ate lunch at Snelling Mon-Wed and Summit Thu-Fri. Smoothies at Summit were cherished. Evening Study was held in various rooms in Aderhold, though the Koi Pond was often visited. This led to a class-wide love of turtles, which ended up on the shirt for the term.

Often, class members would climb the trees outside of Summit while TAnthony slept. He had many bananas hurled at him, and his shoes often ended up tied together.

Dr. Crystal made the class do several skits portraying major events in Cryptographic history, most notably the conviction of Mary, Queen of Scots, for committing treason against Queen Elizabeth. When the class was given the option of changing the setting things got a little out of control.