Hamilton is an RC at Georgia Tech and a 2 Year tipster at Duke East. He is most famously known for having lead one of the craziest and honorable RAG Groups in Term II 2014. During that term, all the tipsters attending can attribute to the fact that he was most likely the nicest and most flamboyant RC on campus and was liked by all who met him. As of 2014, he is 20 and attends the University of Georgia and is majoring in Filmography. 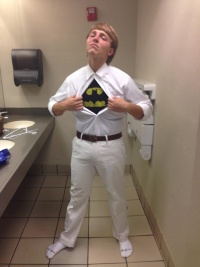 Hamilton being as Hamilton usually is.

Time As A TiPster

As was told to his amazingly awesome RC Group of Term 2 2014 on Amnesty Night, Hamilton had a few interesting stories to share. The Water Condom Balloon Fight: So apparently as most first years do, Hamilton particularly wild during his first year at TiP. An incident so dreadful that it was never mentioned by other tipsters that were part of it. Ok, so the story goes that on a typical supply run to the nearby pharmacy, one of Hamilton's TiP buddies decided to see how badly they could freak out the cashier. Naturally, they brought up to the register the following: a pack of condoms, a cucumber, lotion, and some other things that I forgot. Anyways the cashier's expression lived up to the expectations of the boys but they were faced with a dilemma, what were they going to do with the 10 or so condoms that they just purchased at the pharmacy. After much digression and discussion, they had the best idea ever which included filling the condoms with water and having an all out condom balloon fight. So the next day during 4-5 free time, they acted their plan out and probably had the funnest nonsexual thing ever done with condoms. Eventually an RC came up and saw them having this amazingly intense fight with what looked like very durable balloons and decided to join in the fun 'cause why not?? The fun lasted until the Dorm Residence Hall Leader came upstairs to investigate and immediately put a stop to the situation through a variety of reasons one of them being that they were throwing water filled condoms and the other being the fact that the whole hallway was now soaking wet. Due to their misconduct, the gang leaders had their free time taken away and those who joined up (like Hamilton) only had to go to bed early.

Hamilton has a very flamboyant personality which allows him to be liked by anyone who meets him. As described by Allison the RC on the first day, "Hamilton is the nicest person I have ever met and you will definitely enjoy him as a counselor." He is trusted by all and will assist you as best he can and does what ever is in his power to give you the best TiP experience possible. Also, he happens to own the Gamecube that is a necessity for several evening activities and the last night crazies that everybody develops. He is generally the chillest dude ever.

At Term II 2014 he and his group the Hamazon warriors were the bane of TiP that year and the whole camp considered them as lunatics after their TiP sync performance which can be seen here[1]. The group consisted of Justin, Max, John(Alex), Jun, Alex, Vicente, Charles(Ethan), Paul, Jameson, Ivan, Erik, Wrigley, and Griffin. The many offenses of the group are many but a few will be listed here for the entertainment of those who wish to enjoy it.

On the first day of official TiP after an amazing awesome group night at the Tech Rec, the whole RC was having a final shower before bed time that evening. Max, being the impatient being he is, decided to see if there was an empty shower open. Seeing that there was no towel hanging on the top of the shower stall, he assumed no one was in the stall. Just to double check that there was no one in the stall, he knocked on the curtain and when receiving no answer opened the stall to see Wrigley showering. Wrigley as was custom when shocked, immediately exclaimed, "Duuuude you saw my Peaner." And from that moment on the word peaner was coined and used throughout the term.

On Ham's second day off, he told his group that he was going to Goodwill and Walmart and would buy them whatever they wanted, with the promise of compensation. Vicente, one of Ham's quirkier guys, told him to get "the weirdest thing you can find". Ham found this object in a creepy doll shaped like a little girl, and proceeded to buy it and give it to his group. This is Ham's biggest regret. His group began to leave the doll in all the nooks and crannies around the dorms, leading to several pants-crappingly scary surprises for unsuspecting RCs making rounds that night. They named it Jamerson because it was a funny way of saying Jameson, who was one of the members of the group. Later, Vicente stuck the doll in the foot of Justin's bed as a prank, and Justin freaked out and threw it across the room, breaking its right leg off. The group performed immediate surgery on Jamerson by cutting off the leg entirely and the thigh and replacing it with a sunkist bottle covered in black duct tape facing downwards. The group then decided to employ Jamerson as part of their bizarre Tipsync performance, and during their audition someone slammed it to the ground too hard and its ENTIRE HEAD CAME OFF. Even worse, the head left a shard on the neck that stabbed Erik in the knee and caused blood to run down his entire leg, but not a drop was on Jamerson. It had its first taste for blood. After that, Jamerson was known as the creepy bloodthirsty headless doll with a sunkist bottle for a peg leg, and rumor has it that she's still out there, hiding, waiting...or maybe Ham just took her home with him until next summer. We'll never know.

At Term II 2015 Ham was the only guy RC in charge of a group of girls. They were The Ham Fam. They were the RC group everyone wanted to be a part of. They got Second place in TiP Sync and started the Yee Revolution. The Ham Fam and Sergeant Dad Squad referred to him as "Mom". Ham was actual goals and everyone loved him. Especially his sex stories from a evening activity. One night he took me to the hospital and referred to my doctor with a man bun as doctor dreamy and I hope to never let him live that down. He also tended to be at the center of everything and put everyone in a good mood by his presence. He was always ready with a good story or something entertaining to do to put a smile on your face. He did a lot of swing dancing and the Ham dance.