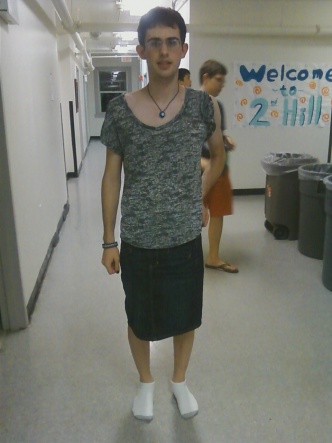 Matt Gibson grew up in Minot, North Dakota, but is now a North Carolinian. He was homeschooled through 10th grade. He began college at 14 and transferred to the North Carolina School of Science and Mathematics, a UNC school that is a college-high school hybrid for 11th and 12th grades.

Matt was involved in several major escapades at ASU and East. Most notably, Matt got away with sneaking out of a fifth floor window, starting a smuggling ring, and playing strip card games (and never have I ever) in the hallways. There was a standing joke that Matt had raped Chance and Chance had had his bastard child (her name is Karma and she's a bitch). This may or may not be a direct result of his winning seven games of blackjack in a row with perfect "blackjack." It may also be related to his luck at other card games, during which he tended to win a little extra spending money. Matt notably managed to date his roommate for 2 weeks before RCs noticed and persuaded them to let him remain roommates with his boyfriend.

Matt as an RC

Matt had the original idea that led to TiP Nation Island. His friend, Cameron Robertson, started the original page. Matt was elected to the first council, along with Jak Dougherty, Kate Evans, Bora Gunay, and Ethan Katz. He wrote much of the legislation that became the rules of TiP Nation Island. When the group fractured, he changed the name to TiP Constitutional Democratic-Republic.

Matt Gibson is fundamentally tied to TiP Constitutional Democratic-Republic. He was the originator of the idea that led to TiP Nation Island. He is the longest standing councilmember and the only councilmember from the first council left. Originally quite popular among the public, his popularity has declined over time. He is currently one of the more active councilmembers. On September 18, 2012, it was he who activated the back-up page that had been dormant since August 2012.

Matt Gibson activated the back up page after the old group fell to Ethan Katz, whom Matt had previously fought to give a second chance against fierce opposition, especially from Marissa Osterhout. Ethan took advantage of this second chance to begin a coup that ultimately toppled the old group. Luckily, a back-up had been created during the Seven Hour Coup. This back-up is today known as TiP Nation Constitutional Democratic-Republic.

Ideally, Matt believes in a Libertarian Republic. However, his realism usually causes him to be more moderate. He is the author of many compromises in the Constitution, including the infamous gun laws included with the right to bear arms. He will typically change his stance to align with evidence and sound reasoning, but this reversal in opinion is hard to gain and requires much effort. Because of his sometimes unusual stances, he doesn't really fit into any party well. Below is a list of his opinions on various topics:

Matt championed direct democracy in the vote for government, campaigning for it. However, it lost to the council system.

Matt believes that the people should be very involved in government. He tries to encourage people to list their opinions and wrote and supported a lot of legislation granting power to the people early on. He believes in a small government with a modest budget. He opposes politicians who are not there to help the people.

Matt has used a variety of tests to assess his political leanings. Below are the results of a few.

Advocates for Self Government

Your PERSONAL issues Score is 90%

Your ECONOMIC issues Score is 60%

According to your answers, the political group that agrees with you most is...

Libertarians support maximum liberty in both personal and economic matters. They advocate a much smaller government; one that is limited to protecting individuals from coercion and violence. Libertarians tend to embrace individual responsibility, oppose government bureaucracy and taxes, promote private charity, tolerate diverse lifestyles, support the free market, and defend civil liberties.

The table below shows your position in the two dimensional space defined by the principal axes of the data. There's more information about how this is calculated here. Note that the names "left/right" and "pragmatism" are simply labels and should be interpreted with caution. Positive values on the "left/right" axis are "right-wing", and negative values are "left-wing". Positive values on the "pragmatism" axis are "pragmatic" or "utilitarian". Negative values are the opposite, which is referred to, rather approximately, as "idealistic" below. Use the list of statements to find out exactly what the axes do mean.

The variation in the data on the "left/right" axis is much greater than the variation on the "pragmatism" axis. The most extreme values on on either axis are ±16.6132. The table below shows your position in both "raw" and normalised (between -1 and 1) coordinates. 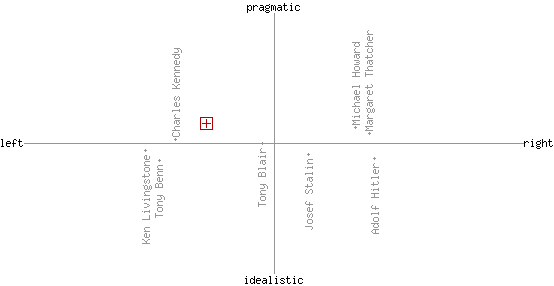 On the left side are pacifists and anti-war activists. On the right side are those who want a strong military that intervenes around the world. You scored: -9.65

Where are you in the culture war? On the liberal side, or the conservative side? This scale may apply more to the US than other countries. You scored: -5.91 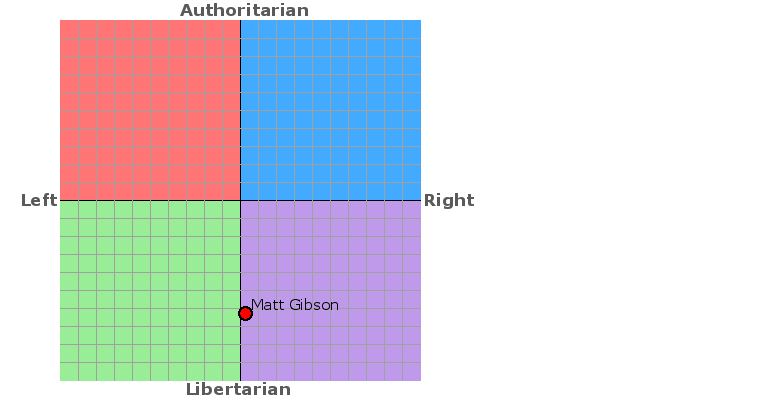 Guys, please don't edit my profile. Say whatever you think of me and/or what I've done below. Please leave your name with your comment. I will not delete any opinions of me, no matter how bad, but I will delete troll remarks that have nothing to do with me. Thank you.  :) -Matt Gibson, September 3, 2012