In 2014, Electrical Engineering students got so fed up with the robocoP assignment that they decided "screw this, we're making a tip wiki page"

Electrical Engineering, a class known to many as AP Robotics, has been a frequent class at Duke West. During West Term 2 in 2014, the project for us was to make a seven-bit display read the scrolling word "robocoP". Now, you might be asking yourself, why is that so hard? Why isn't the r capitalized and the P is? Well to ignore the second question and focus on the first, it's not overly difficult it's just such a pain in the butt that it took several classmates several excruciating days to complete.

The robocoP project was presented to the class after learning in their lectures about Transistors and logic gates. We were only allowed to use programming code to create a 3-bit clock that the sign would run off of. thus we were mainly using a breadboard with built in logic gates available for our use. Due to the fact that most EE students sleep through these lectures, they lacked the sufficient understanding of logic gates to even begin to fathom the wiring mess that is robocoP.

robocoP has since become a painful joking reminder to all of the EE class. It was truly a horrible experience. 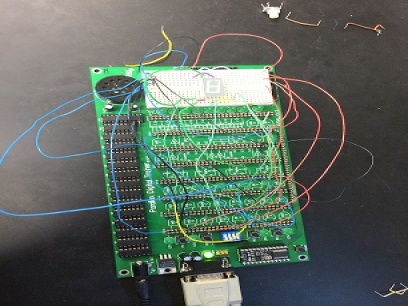 Term 1 of 2014 also had a particularly horrid time with this project as well. With only one group even coming close, they spelled out robocob, and then said screw it. So many people were confused and irked by the numerous logic gates that were needed and extra breadboards used, that when it came break time, they literally fled the lab and went to the cafe next door. This project caused many headaches and several angry Pokemon matches during breaks.

Term 1 of 2015 currently holds the record for most groups to successfully complete the robocoP project; 5 out of 8 groups were able to complete this feat in just one day under the famed tutelage of the legendary Brett "Fratboi Foxxx" Fox, and Joel "Juice God Joel" Luther, with Boom Squad members Will Smith and Kevin Bowerman finishing first (in the first three hours!), far ahead of the rest of the class.