Richard "The Cannon" Cannon's RAG at 2015 Duke West Term 1. This RAG is most known for chanting "Boom" and "Tower" loudly, both when most and least appropriate, thus they have become The Unknown Chach's least Favorite RAG. 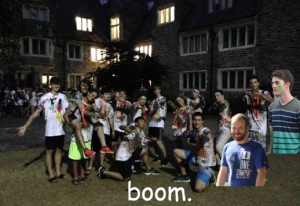 Most of the Boom Squad after the 4th year paint war.

The Unknown Chach's immense hatred of this RAG began after this infamous TiPSync performance, in which the RAG preformed "Shia LaBeouf Live" by Rob Cantor. When halfway through their TiPSync their music cut out by "accident", screams of "sing it" were heard from the crowd (courtesy of Becca). Will Smith heard these cries and faithfully sang the rest of their song with ease, completing the performance with a decapitation. The Unknown Chach of course hated this performance and lectured the boys on their public displays of extreme violence; however, the spirit of Shia LaBeouf lived on for the rest of term.

A Shia Laboeuf game is being made at the time this article was written by none other than a member of the Boom Squad, Dom Korunda and an unknown third year from his class.

The original plan for the RAG's one-word-per-member answer was 11 booms followed by "Ha! Got 'im". That was until Elton provided the perfect opportunity when he asked "Who is Bofa?" In that instant, all members knew to change their response to be 9 booms followed by "Deez nutz! Ha! Got 'im!" Much to the dismay of the host, Josh, and the rest of the staff