Becca is rad AF. She lives in Houston, TX, and will be attending TAMS in the fall (with the lovely Alyson Win.) She was a TiPster from 2012-2015, attending Term 1 every year at NCOF and West. She was a 4th year 4th Year.

During her first year, Becca was known for her "oozing sunburn". Upon arrival at camp, she was already burned but after a long day outside during TiPlympics (go team Brazil!), Becca managed to get a second degree burn on her nose. Her nose then began to blister and pus would leak out of the blisters when she touched her nose. After some time coping with this burn on her own, Becca began to complain about how bad it hurt. Remy then appeared to save the day by giving her aloe. This sharing of aloe was the beginning of what would become a relationtip within their fourth year.

In her second year, Becca was actually just really boring and awkward and didn't do much, what a nerd.

During her third year, Becca participated in a number of important events. First, she was on Green Team for Quadfest when they marched out onto the field chanting: "this is my swamp" in German, and remained intense and fearless for the entirety of Quadfest. Secondly she was almost caught in a boy's room on the last night where she spent 4 hours eating Asian candies and having deep talks with Jason Ly (member of Boom Squad ) and then again during the events of Bennett's Room with Will Smith. And third and most important, her relationtip with Remy began as he asked her to the final dance, after the two had begun to redefine their friendship from the past three years.

In her final and most epic year, Becca has taken on a lead role among the fourth years and is paving the way for a new generation of tipsters. She is an active honorary member of the Boom Squad and performs her duties as Boom Mom dutifully: keeping them out of trouble (both legal and illegal) and in general being their only voice of reason.

In addition to her commitment to the Boom Squad, Becca remains wholeheartedly dedicated to her own RAG (the Josh Squash) and organized the entirety of their legendary TiPSync performance. The girls preformed a mashup of television theme songs entitled #flashbackfriday. This mashup included Teen Titans, Tom And Jerry, Avatar: The Last Airbender, iCarly, Drake and Josh, Hannah Montana and Kim Possible. Becca took the impressive role of Aang in this TiPSync performance and managed to catch the mop handle she used as a stick twice during the performance (which she was very proud of).

On the Monday of her final week, Becca served as a key player in The Front Hug Incident, along with co-star Jason Ly, further adding to the constantly expanding hatred of the Boom Squad. Becca was also a minor player in The Great Ceiling Tile Heist, removing a single tile in passive aggression. Despite her constant involvement with the Boom Squad and their shenanigans, she did discourage certain acts, namely Will's plan to break in to the breaker box in the last night, and her failed attempts to stop them releasing custom balloons during the last dance.

Becca, preforming her duties as RAG Mom, actually designed and ordered 21 shirts for the Boom Squad (they only have 14 people in their RAG how did this happen?) Beyond all this.

Becca has spent every moment of free time with Remy in the Boom Squad "commons," and the two of them are obviously a relationtip and anybody who says otherwise is lying to you. 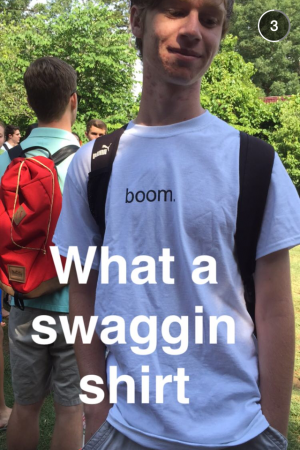