The Shlurpp was created by Spencer Gaberino during Georgia Tech Term 2, 2017. He taught many TIPsters "the way of The Shlurpp" during the term. An outside viewer may call a Shlurpp a "root beer float." Over the course of the term those who participated in The Shlurpp were named The Shlurpp Buds. It should also be noted that Theo Hewitt almost experienced Death by Shlurpp.

Arman Tavallaei (Improvised one on the last day)

Theo returned to Georgia Tech his 4th year (2018) where younger tipsters asked him how to make a Shlurpp. Between his loyalty to Spencer and the dining halls lack of supplies at any given moment, the recipe was not shared. The Shlurpp's exact recipe to this day remains a mystery to all who were not apart of the original Shlurpp Buds. It should be noted that Marie Boudreax (who went to GT T2 2017) showed Elijah Flemming (in 2018) how to make a Shlurpp incorrectly, and he should not be trusted in future Shlurpp making. However, may have picked up the recipe after begging Theo (in 2018) to make him one because they are "the best root beer floats [he] ever had."

When one creates a Shlurpp with anything other liquid than root beer it is considered Defiling The Shlurpp. These are those who Defiled The Shlurpp:

Isaac K: Shlurpp made with coffee.

: Shlurpp made with strawberry Fanta.

Theo Hewitt: Shlurpp made with cream soda. (Spencer did try this Shlurpp and wasn't too mad about it. He even mixed a lil with his own Shlurpp.) 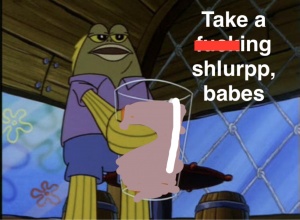 Made by Theo
Retrieved from "http://www.tipwiki.net/index.php?title=The_Shlurpp&oldid=71762"