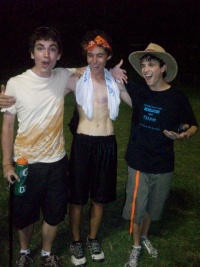 The Triforce as they normally appear

The Triforce is the name of the triple bromance between David Freed, Frank James, and Max Silbiger. (East II '08-10)

Though the idea had been circulating of these three as a "triforce" since the beginning of their third year, this was not officially acknowledged until the , in which the three pieces of the Triforce were distributed and worn on each member's right fist (as in Ocarina of Time).

During the intervening year, the realization dawned that the Triforce of Power and Triforce of Wisdom were incorrectly placed! As fourth-years, the members decided to switch David and Max's Triforces into their rightful places - Max on the left, David on top, and Frank on the right. 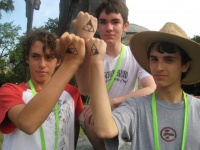 In their Third year
Retrieved from "http://www.tipwiki.net/index.php?title=Triforce&oldid=19465"