Big Texas. What can I say about this legend? During term 2 at Rice 2016, Erick Velarde bought the extremely large pencil as a phallic joke at a museum gift shop. The screwed up pencil was adored by many, especially the owner who kept it close to his heart, and soon became a camp wide joke. On July 24, 2016, at dinner the heist began. Diamond Warren-Tucker stole the pencil to see how it would affect Erick, and the war started.

The two sides included Erick's (Zane, Neal, Richard, Caden Hanson, Xander, etc.), and Diamond's (Chelsea, Sofia, Lily, Braden, Marissa, Emily, etc.) who took it twice. There was much tease between the two sides such as snapchat pictures of people holding the pencil. Big Texas was a symbolic remark for the 3rd (and some 2nd) years of Rice University Term 2 2016. It both divided, yet brought these Tipsters closer. 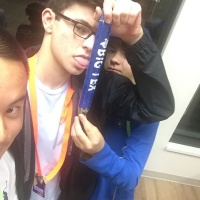 After Erick passed Big Texas down to Neal, he nearly left it in the LSU lobby on the last day of TIP 2017. Luckily, Caden Hanson noticed this and took it home to return to Neal (if Neal decides to return for his 4th year in 2018)

When Neal didn't return for his 4th year in 2018, Caden brought Big Tex to TIP and gave it to Cameron Meredith upon Neal's request. The guys vs girls battle began once again over the pencil. Highlights included:

At the talent show, Big Texas was passed down to Ron Warren, the first TiPster to possess Big Texas that was not present at Rice Term 2 2016

The hunt for Big Tex escalated greatly in the last day, as I am not completely informed of all of the events, I will try to make a rough timeline of the events I do know of.

I can't really timeline any other specific events, but long story short, the 4th year girls end up swarming 4th floor, however do not find big tex, kevin play the final countdown on his trumpet during the last 3 minutes.