was pretty much a cult, complete with a figure-X sign produced when the boys (a.k.a. ) crossed their forearms above their heads. They invariably made dinnertime a spectacle, giving toasts to whatever people/places/things/ideas/entities were on their minds (this often earned them The Look from Sam the OSC and other staff members, but to my knowledge Xiao's RAG was never specifically disciplined - for this or for any other activity). In fact, Xiao was not even disciplined for deserting his blackjack table at Casino Day. Xiao threw up his cards in anguish, and told some random kid named Duke to deal the table.

One thing that set apart Xiao's rag from the other inferior rags was the fact that he had many catch phrases such as "Eyes on the prize" and "Gotta have heart." But the best catch phrase made up by his rag members was " Xiao equals God."

Though Xiao and his cult might have been a nuisance to some (perhaps the kid who Xiao reportedly called an "asshole"), and though certain religious-minded people might have found it offensive that he was dubbed "God" at some point... Xiao's RAG is exemplary in that they were more unified than most RAGs ever have been or will be in the history of TIP. They were beautiful to watch.

One key bit about Xiao is that he never was, nor was ever invited to be, a member of the 2006 Term 2 Superrag. He was, in fact, Superrag's Public Enemy #1, and was thwarted by Superrag on many occassions.

Xiao would often come downstairs at night to Carrie's RAG and tell them all about his love life in a very detailed manner. He described all the girls who would "rip out his heart and piss in his soul." 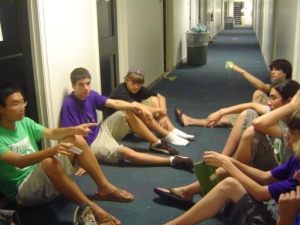