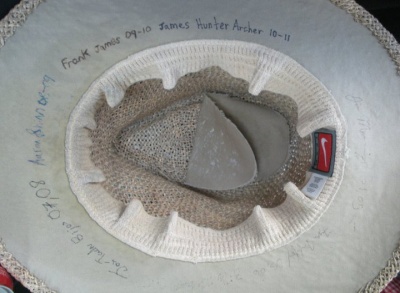 The Gentleman's Hat viewed from the bottom. (2011) 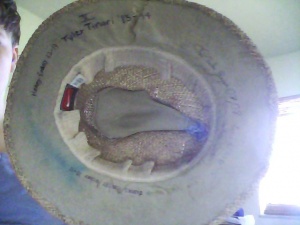 The Gentleman's Hat viewed from the bottom. Sorry it's blurry. (2013) 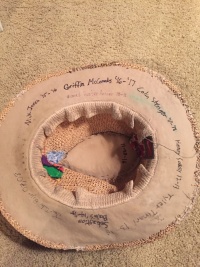 The Gentleman's Hat viewed from the bottom. (2017)

History of the Hat

The Gentleman's Hat is a major tradition at Duke East Term II. It is a straw hat with a red band going around the top with a University of South Carolina logo on it. On the bottom of the hat is a list of names of the gentlemen who have been previous owners of the hat. Although Julian Moresi didn't identify as male at the time, they are still more of a gentleman than most men can hope to be.

Inside the hat has the date 11-28-16 written. This is the date that 2017 owner Griffin McCombs' aunt unfortunately passed away, and she meant very much to him and the death of her affected him greatly. He chose to honor her by putting the date of passing in the hat, sealed into the history and future.

The date 5-30-18 is also written inside of the hat. Colin Stenger’s gymnastics coach of 9 years died of a widowmaker heart attack, and he was like a second father to him. He served as a role model and was one of the people who taught Colin to have faith in people and treat them with love.

Owners of The Gentleman's Hat