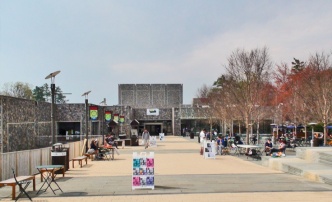 The Bryan University Center at Duke.

The Bryan Center, also known as the Bryant Center, is a building at Duke West. Fourth Years get the privilege of walking to the Bryan Center. Previously, they could go by themselves and third years in groups of three. The current policy instead is that every TIPster requires an RC to go with them. Many assume the reasoning behind the change is the fact that this used to be/and still is a place for TIPsters to hook up away from RCs.

Visits can also be ideal as a free time activity, or for RC Group nights.

There are various shops and restaurants located within the Center. Notably, McDonald's and Panda Express, the only sources of human food at West, are located here. Upstairs shops include a convenience store, which really is just a bunch of junk food for TIPsters to buy and take back to their dorms, and a campus store that sells Duke merchandise, shirts, hats, etc. When downstairs, they sell "on-sale" items and acedemic supplies, including pens, pencils, books, etc. Another shop is the Bookstore, which has shelves of literature, including those done by alumni, comics, manga, magazines and stationary (eg: bookmarks, Moleskines), much to the enthusiasm of nerd campers. In the basement, there is a computer store selling laptops and computer paraphernalia.

The downstairs has various pool tables, couches, and a grand piano. There are also TV rooms, but aren't available to TIPsters. The shops include a smoothie cafe, the MickeyD's, and vending machines for Vitamin Water (quarters only), Vault and other sodas. Additionally there are two sets of three computers in the Bryan Center, where campers (usually fourth years because they get there first) can be seen checking email, facebooking, or even playing Starcraft.

The Bryan Center also has a theater downstairs that is used for the first day rules, a campus wide movie, and the end of the year talent show. In addition, weekly dances are occasionally held at the Von Canon Hall.

During West 2013 Term 1 Talent Show: the female RCs threw whipped cream on plates in the male RCs faces while singing/dancing to Sophia Grace's "Girls Just Gotta Have Fun". This made a huge mess which got everyone kicked out of the theater so that the TiPsters could no longer watch the end of term slideshow and the fourth years couldn't do their speeches, "Doctor, Doctor" skit and other end of term stuff. Everyone was kind of mad. It also thundered as soon as everyone walked back to the quad so for 30 mins or so, the TiPsters were told to remain in O commons, K commons or hallways. Of course there were people who broke the rule and went up to the 2nd/3rd floor but most followed the instructions. After the 30 minutes everyone was told to go to one of the common areas while the 4th years went to the N commons which were in the basement. Three RCs went on Google Hangouts with each of their laptops and connected their laptops to the TV so the fourth years could do their skit and speeches. Some parts were in audible but we got the message. The slideshow was then shown in each common area. All in all a memorable event.

Movies shown at the Center