Card games are a good way to pass free time or mandatory fun at TIP. They are also a good way to get yelled at for being too loud, if you're Sophia Chang or Jack(ass) Southard. 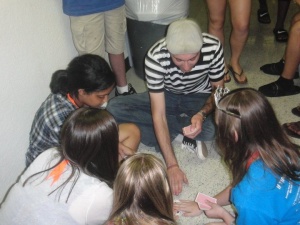 The seemingly most popular game is ERS, or, Egyptian Rat Slap, also sometimes referred to (out of RC's earshot, of course) as Egyptian Rat Screw. The name has little meaning, other than to severely intimidate anyone who has never played before. ERS can be a rather violent game, as you have to slap cards (a bit like SlapJack). It can also get very noisy, as much shouting is induced when you are slapping. 4-6 is the optimal number of people. Wearing a ring is not recommended and is loathed. In the past, however, wearing a ring has been totally not allowed. In the 2011 West Term 1 Primate Biology class, this was the classic game to be played during break times. It got very very competitive, with the infamous hard-slapper Indy. It has also became a classic at UGA Term 2 in 2011 and 2012 as well as Georgia Tech Term 2 in 2014, where the Writing with Power class played everyday next to the Skiles' Quad and you could always find a group playing in the 3rd floor Hefner lounge, normally consisting of Mack Halbrook, Andrew Marsden, and Manuela Martinez, as well as anybody else who decided to join in. However, the two most notable ERS players in history are Ben Sun and Sophia Chang, with Ben's streak having been broken on the first day of East T1 2018 by Sophia. This game is often associated with the Relic the 10 of Clubs, which is an official cards relic at West passed down from Ben to Sophia, and most recently to Joey.

Ace - 4 chances to beat it by putting down another face card. If they fail, you win the pile. If they succeed, the person after them has to try to beat that face card, and so on until someone fails.

Optional rules include: Other slap rules -

and 10 stop - during a Face card sequence, if a lucky player plays a 10, the sequence ends and the game proceeds with the next player placing his/her next card, continuing the game.

Very popular at Tamu Term II 2010. Two players at a time, the objective being to get rid of your stack of cards first. You must shout out "SPEED" in order to win.

Another semi-popular game, though more at Davidson than elsewhere, is Asshole (Or in front of RCs, Presidents), not to be confused with the stripping game, President. Asshole is a better group game, though not as exciting and intense as ERS, but does not have a clear endpoint. This makes it better for long periods of empty time, i.e. when the dances are lame. Generally, it is also the game played when people are half asleep, or lack a decent table. Six is the optimal number of people.

Mao is a group game of cards, but can be played with two people. It is often associated with the relic the Book of Mao, which has been put together with the 10 of Clubs onto Joey. The only rule anyone can say out loud is that

1. We are not allowed to talk about the rules beyond rule #1.

People learn to play by trial and error.

Rules vary from place to place and person to person. Therefore, it is almost always a good idea to pick someone to be the "grand poobah" and play by their rules only.

Mao is a lot more nuanced and complex than I can say, because of rule #1.

The leader, after winning the round, is called Maomaster, but before the first round has been won, the dealer/person who maintains the rules is called "Chairman". Other terms for the leader include "President", "King/Queen", and "Chairman". This last name leads TIPsters to conclude that Mao is actually named for the leader of communist China and his tendency to punish people for breaking rules that they did not know existed.

Yet another card game played at TIP (or at least Duke West '05) is mafia. This is optimal when a large group of people is gathered that a) is sick of ERS b) has too many people to play ERS. In the game of Mafia one (or two) people try to kill all the townspeople, while an angel/doctor tries to save them and a detective investigates. Often at TIP, since TIPsters are so creative, hilarity ensues, either by always killing the same person (grrr) or creating non-TIPropriate/gruesome deaths.

Note: It is possible to play Mafia without a deck of cards. It is more often played without cards than with.

The king of BS at A&M 08 was Deepok the RC withought an RC group. He was known for his terrible bluffing skills and random outbursts of BS.

This game was popular at UGA term 2, especially within the Philosophy of Knowledge class. It was first introduced by Andrew Sanchez.

The rules are as follows: All cards (minus jokers) are equally, or as equally as possible, using all cards. 2 is the highest card, expressed as a wild card, while 3 is the lowest. The object of the game is to rid yourself of all your cards. The person with the three of spades goes first. The next person in the circle lays down either a higher card or a card of equivalent value. This continues either until no one can beat the highest card, or someone lays down a two. When one of those two things happens, the pile is cleared. Whoever set down the last card begins the next pile. The first person to have an empty hand is Presidente, the second is Vice-presidente, the second to last person is Vice-Janitor, and the last is Janitor. All other players are neutral.

Rule of Twos: The last card you lay down cannot be a two. The consequence is becoming Janitor for the game. To avoid this, it is recommended that you lay down a two near the end of the game so that it will clear itself.

Burns: If three people lay down three successive cards (ie 3, 4, 5 or Jack, Queen, King), those people are allowed to discard one card into the discard pile. Suit is irrelevant.

Skips: If two cards of the same value are placed successively, the person after the one who set down the second card is skipped.

Doubles: Anyone possessing two cards of the same kind can place them down to begin a pile. All cards in this pile must be doubles.

Triples: Basically the same as above, except with three.

Completing the set: This is better explained situationally: If Bob sets down two threes, and Mary has the other two threes, she can set them down, even if she is not sitting next to Bob. This will clear the stack and Mary will start the next pile.

For the subsequent game, the Janitor gives the President two of his best cards, while the President gives his two worst cards. Same for the Vice-President and Vice-Janitor, except they each exchange one card. Neutrals neither give nor receive cards.

At Texas A&M this game is known as VC or Vietnamese Cards, and is played exactly like this with the exception of burns and skips( They are nonexistent). This is a game that is normally limited to 4th years, and the occasional epic third year.

Common for large groups of people. More often than not, Spoons becomes a very violent game..no pain no gain..Spoons is very similar to Musical Chairs. The object is to get four of a kind and grab a spoon. Players sit in a circle and each receives four cards from the dealer with the pile of spoons in the middle. The dealer takes what is left of the deck and picks up one card, decides if he or she wants to keep it and passes one card to the left. Players may only hold four cards at a time. The faster you pass cards the quicker and more confusing the game gets. Once a player has four of a kind (Four 3's, Jacks, 7's ext.), he or she must grab a spoon. If you see another person grab a spoon you must also grab a spoon. There will always be one less spoon than needed, the player who does not grab a spoon is out. The dealer then rotates to the left, placing the original dealer at the end of the line, receiving the junk cards. If the deck runs out, the dealer must start grabbing from the Junk pile until a four of a kind is retrieved.

Note: Spoons does not always need to be played with spoons. Sharpies, cups, coins, bags of candy, Lanyards, and bottles of nail polish can replace spoons if none can be located.

Also Note: it is NOT recomended to play with Lanyards. At TAMU Term II 2009, an intense game of spoons was started using Lanyards. While wrestling over the last Lanyard, Audrey and Hunter ended up bending the card, which remained deformed for the remainder of the term.