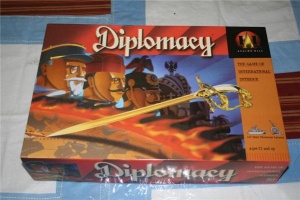 A pristine vintage version of Diplomacy

Diplomacy is a strategy based board game that takes place in 1900 Europe. The game has been played for years at many campusus but truly came to fruition at Texas 2011 Term II. It became such a popular free time activity that sevreal people considered making it the official board game of Duke Tip. The game occupied so much time of tipsters days that it was considered to actually decrease the chance of a TIP Baby --Tipdogg 01:08, 11 August 2011 (UTC)

In addition, the RC/RHL Geoff Toy, who learned to play Diplomacy at TIP all the way back in 2001, has brought a copy and taught students to play every term he has worked for TIP. In fact, playing Diplomacy with TIP students is one of the things he looks forward to most about working at TIP, and he fully supports Diplomacy being the official board game of TIP.

At ASU in the class America and the World Diplomacy was used as a teaching tool in 2010 Term 1, and as a kind of final project, in addition to a paper and a simulation, TiPsters had to create a version of diplomacy set in another time. TiPsters got far to into the game, and the goodnatured backstabbing continued throughout the term.

On East Campus, Term 2, in the summer of 2012, Diplomacy was played by the Evolution of Empires class. This became extremely heated and eventually led to a tie between two countries at the end of the 3 weeks. Austria-Hungary, although they didn't win, was the best country by far. It was made up of Lexi Stewart, the Sexy Mama for 2012, and Jordan Green.

Colin Hinze is a master of Diplomacy. His 2017 International Relations class played two games throughout the class, and only the teams that Colin was on won. He is considered possibly the greatest Diplomat of all time.

Most of the players of Diplomacy played in the room of Google (who passed his name down to Jacob after his fourth year and is now Google plus), he was the one who more or less introduced the entire brocean and boothangs to the amazing game.

Also Charlie Hutto who not only was a master player but also recruited the orignal players to the game (to witch he did not participate the entire first round) and theoretically started the craze. Richer Denmark was also an amazing player and tried capturing Denmark the first move for some reason.

Shiv Daftari came out strong in Diplomacy in UGA Term 2 starting as Russia. He is widely regarded as the finest Diplomacy player to ever pass through Duke Tip. He was involved in the Great Game of 2013 and with shrewd alliances won the game through manipulation and threats.

Did You Play Diplomacy during TiP?

If so, add this to your profile!