The Team Team is the Ultimate team that has won the Annual Student Ultimate Tournament at Duke West Term II in 2008, 2009, 2010, 2011, 2013, 2014, and 2017. Altogether, the team has compiled a 16-1 record against student teams and is 4-3 against the staff team. In Duke West T2 the Team Team officially lost to the Boom Squad, 7-0. This loss was attributed to the lack of active recruiting by the team captains, as well as being outplayed in speed and efficiency. In addition to four fourth years, all second and third year talent went to Boom Squad due to superior recruiting.

The Team Team was approximately balanced between third and fourth years in 2008 when it defeated and . In 2009, however, the Team was nearly entirely fourth years, most of which returned from the previous year, and beat Azn Invazn and the Thundercats on the way to its second championship. Peter Yom, a fourth year in 2009, left the Team Team to Thundercat's captain, Tyler Vance, in his will at the end of the termbook. Instead Tyler returned to his Thundercats in 2010, while the Team Team was refreshed entirely by third and fourth years (and one second year girl), led by co-captains Isabella Sanders and Jaclyn Boozalis. After beating The Other Guys in the morning, the Team was faced with a rematch of the 2009 championship against the Thundercats in 2010. The Team triumphed, winning the student tournament for the third straight year. The Team Team was left to Brandon and Nicholas Chen (also known as the asian twins) in the fourth year wills of the captains of 2010. Since the twins didn't return to West in 2011, the Team Team was captained by returnees Estevan Cohn and Britt Hatcher. The Team Team was built around five returnees (Estevan Cohn, Britt Hatcher, Noah Thorn, Blake Hawley, and Bobby Huddleston, all fourth year guys), three new fourth year guys, a third year guy and four third year girls. The 2011 Team Team beat The Other Guys 11-0 and the Thundercats 7-5 in a game that was timed instead of having a score limit in order to have time for the Student-Staff game. The Team Team was left to Michael Schroeder and Rylie Nelson in the fourth year wills of the 2011 captains. Since the tournament had teams chosen by staff in 2012, the Team Team did not participate and was left to Gant Player by Liz Harper (2011 returnee) for the 2013 tournament. Captained by Gant Player and Jaci Sullivan, the Team Team went on to easily win the student tournament in 2013. It was then left to Sam Fisher for the 2014 tournament.

After Sam Fisher left for Georgia Tech, a new Team Team was assembled at Duke West Term 2 2014 and won 4 games in a round robin, including a 3-0 sweep against the primarily 4th year Thundercats, while using 13 3rd years and just 1 4th year. The Duke West Branch of Team Team has been left to Nathan Gurgens for the 2015 tournament.

In 2017, the Team Team returned to their winning ways after being irrelevant in 2015 and 2016, beating Team Mbuzi (the 4th year team) 7-3 and Team Ant (2nd year team) 4-3 in the Round Robin Student Tournament. In the Staff game, they crushed the Staff Team 11-2, signifying their return to TiP West tradition. 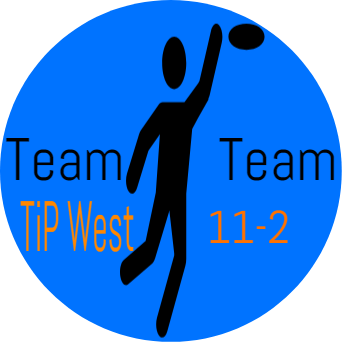 During the most quiet and suspenseful part of the movie Wall-e, the entire camp heard Wall-e announce "the team team sucks." Though some may debate this fact, because it was in a Disney movie, it must be true.