Zulu Force is the name given to RC Andy's (aka R-Candy) 4th year boys RAG at West term II 09. This is not to be confused with the frisbee team known as The Zulu Team comprised mostly of boys from Andy's RAG and a few girls from RaJhai's RAG. The Zulu Force is known for raving with the strobe light whenever possible. Zulu Force became, to many, the unoffical leader of the West Term II '09 RAGs. 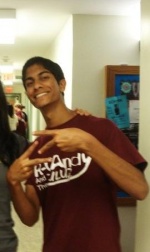 The Zulu Force name was created early in the second week of the term. With general approval for Zulu but disapproval for Team, Temple came up with the Zulu Nation. This was generally accepted and is still used in some instances to this day. However an unknown member, possibly Alex, then came to the great epiphany that is Zulu Force. This was immediately accepted by all Zulu members.

The 'Z' symbol for The Zulu Force known by all, was originally created by Ajay Shroff. It consists of two interlocking peace signs in which the open spaces make a Z (or an S from the Zulu's perspective).

Because Zulu is better than any other RAG and half of them live relatively near each other, Zulu is actually planning on having a separate reunion, apart from 4th year reunion that is still in the works. Options are frisbee on the beach, frisbee in the snow, and Dylan's Plan but one thing for sure is that some serious raving will go down.