Max was a TIPster for three years at Duke East. Most people knew him because of the time that his parents hired a guitar player to serenade him in the dining hall on his birthday. Others closer to him knew about his amazing musical abilities, frisbee talent, generosity (when sharing the cupcakes he got for his birthday every year), and incredible ability to produce pseudo-philosobabble at a moment's notice. 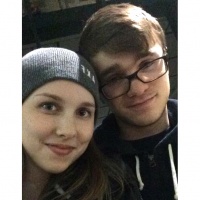 After being waitlisted and not getting to go to Davidson for his first year, Max went to East Term II as a first year second year. He quickly bonded with Neel over How to Train Your Dragon, but kept pretty much to himself for the first several days. For their first RAG night, Duncan's RAG and Wyatt's RAG took a group trip to Ben & Jerry's, and while there, Max was approached by Margaret Overton, who had noticed his xkcd shirt and quiet nature and decided to talk to him. They quickly became friends, and the Max-Margaret-Neel trio took to hanging out in the hallway of Pegram playing frisbee and doing the crosswords hanging on the wall. (By the end of the first week, Margaret and Max had become Marx, much to everyone's delight.) Max made a lot of friends by handing out the cupcakes sent by his parents for his birthday as well as playing guitar and singing with anyone who came along feeling musical. Unfortunately, at the end of term, he was put on the dreaded 5:30 bus after staying up all night, leading to a very emotional goodbye for everyone involved.
Class superlative: Most Likely To Not Crossdress
RAG nickname: Max "The Mellow Fellow" Stevens

Max came back for his third year and became known throughout the camp almost immediately. His birthday was during the beginning of the first week, and his parents thought he would enjoy having a mediocre guitarist come and serenade him in the middle of lunch. They were very wrong. Luckily, Max became famous throughout camp for a different event at the end of the second week. In an unfortunate turn of events, there were too many third years for all of them to live in Brown, so his RAG was one of the ones that were put in Alspaugh with the fourth years (as Bassett was undergoing renovations). As a result, he brought honor to his dorm by representing the Fourth Years in Quadfest in Limbo and winning. Not only did this earn him eternal glory, but the next year they took Limbo out of the list of events, making Max the TIP East Term II Limbo Champion until the end of time. During the last week, Max worked with students from Lit License to write an original song, which they performed in the talent show. He spent the last night sitting in the hallway singing with his friends.
Class superlative: Most Likely To Get Married at the Edward Sharpe and the Magnetic Zeros Concert
RAG superlative: Most Likely To Have Cupcakes

Fourth year started out less smoothly than usual for Max. Neel, his friend of two years, was not able to return. His relationship with Margaret, which had ended after second year and again after briefly restarting third year, was abruptly determined to be one of just friendship at the end of the first week. And without Limbo, what would be his calling? But Max never lost his spirit and chose to dive into his class with enthusiasm and vigor. He thrived getting to talking about philosophy for hours every day, and his classmates developed a very high regard for his insight and depth of thought. He also contributed to TIPster pride by playing for the Lazer Dragons in both the Ultimate Frisbee tournament and the Student-Staff game. In the talent show, he performed "I Will Follow You into the Dark" by Death Cab for Cutie with Gregor Haas and Tommy Bui and was part of a five-person a cappella group that performed the song "Run to You" by Pentatonix. On the last night, he spent part of his time in the fourth year common room wrapped in a blanket with his friends. When there was just half an hour left before the new policy of a last night bedtime came into effect, he gathered most of the fourth years into the piano room and led them in singing "Piano Man" by Billy Joel and "Hallelujah" by Leonard Cohen for the most emotional experience many TIPsters would ever have. He was the third-to-last person to leave campus the next day.
Class superlative: Most Likely To Pseudo-Philoso-Babble
RAG superlative: Most Likely To Mismatch Shoes

Max is now a student at St. Olaf College in Northfield, Minnesota.

Max and Margaret Overton have a complicated past despite having the best ship name in existence. They dated second year, then broke up. Then they started to be a couple again third year, but after a week or so Margaret foolishly decided to date Malcolm Landrieu instead. Then during the beginning of their fourth year, Margaret and Max decided to go back to being in a relationTIP despite their previous two attempts ending in sadness. But during the end of the first week, Margaret told Max she didn't think the relationship could last after they each went home, so they broke it off and Margaret ended up in a relationTIP with a third year named Carter. However, on the last day, Max and Margaret realized what they were each about to lose after being friends for so long, and about a week after leaving TIP, they officially got back together as a couple. They have been together since August 2014.

Max was elected as a council member in TiPNation Island (now the TiPNation Constitutional Democratic Republic) and assisted in writing the Constitution before interest in the group diminished and the project was generally declared a failure.