This is Sam Park.

Known to sing and dance to Party in the U.S.A. wearing nothing but booty shorts and tank tops for talent shows, dance to the Thriller (the michael Jackson version), and sing his own renditions of Friday infused with the love of TiP for Talent shows.

His Lip-Syncs were known to be one of the best, and the same could be said about his dance moves at the dances. He was in a relationTIP with the beautiful during his fourth year. He is best known for the "fortune brownie" which he adorably asked Emily to TIProm with! Everyone would know his name, and he would only be able to remember barely any names, mainly because his problem with remembering names were so horrible unless you were a friend on Facebook.

He is also the owner of 10 nerf guns, which have been notorious at shooting zombies at Humans Vs Zombies.

Sam loved to sing a plethora of songs, here is a list of strange, annoying, random, or plain awesome songs that Sam sings:

Sam was in a Bad Bromance with Bora Gunay. They knew each other for 11 years, been friends for that same amount of time, and have everything associated with best buddyism! Including being an utter annoyance to the other party at regular intervals.

Which in many cases lead to Bora physically hurting him. but mostly just threats.

Sam is also the founder/Main DJ/head honcho of TiP-Radio, a radio station dedicated for TiPsters. He spends over 10 hours every weekend dedicated to TiP-Radio as a way to get all the tipsters together in one place and play some music together, with people calling in, and such.

Sam is also in a cult of TiPsters known as the Super Cups of Coconuts which died out by his 4th year, but was a funny cult going on.

Sam was very talented, although only a mere glimpse of his talent was shown at the TiP Talent show.

Sam Park is one of the (if not best) choreographers for Lip Sync. It is the result of a man who has mastered the art of Tutting, the Robot, and watched copious amounts of America's Best Dance Crew. After his 2nd year of TiP, he decided to stop dancing in the Lip-Syncs, but rather be a choreographer and director of the dances themselves.

While a pathetic performance of Throw It On The Ground won, mainly because they had "props and effort", Sam gladly knew that in his heart, he had won, in his final year, and only lost to the other groups mainly because the judges (mainly OSD Lee) didn't want that 4th years group to win EVERY event at TiP, including Dawgfest, the Amazing Race, and TiP-Trivia which were all won by his RC group. 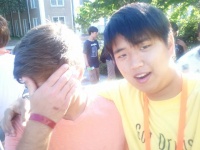