We Need a Megaphone 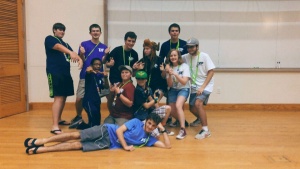 WNAM on the night of the Duke TiP 2016 Talent Show.

We Need a Megaphone is the name given to Praise's RAG of West Term 1 2016. There were 8 members of the RAG and 4 honorary RAG members, making a total of 12 RAG members, all of which were certainly not . All of We Need A Megaphone attended Duke TiP 2017, and all of them were at Duke West Campus for Term 1.

The WNAM group chat is currently under the benevolent leadership of Abby Hollmann. 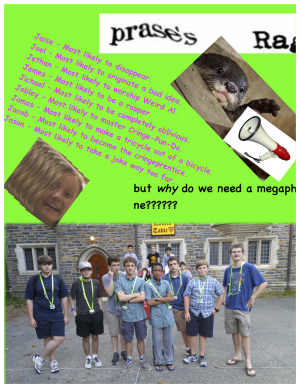 A * denotes an honorary member. Two ** denotes members that were added later.

Whether or not the group chat's bots are members or not is often debated. In a peacekeeping effort, they will be listed here, in their own "bot member" section.

Countdown Bot and Game Bot are often shipped (CountGame Bot), maybe as a way for their creators (Thomas and Matthew, respectively) to let out their pent-up feelings for each other...

West Nambia and the Group Hierarchy

On October 9th, 2016, the group decided upon an official leadership hierarchy as Joel was decided to be the captain of WNAM the day before, and claims that Mads was queen were (wrongfully) flung about. Joel, instead, declared himself president and Mads prime minister, which Jobley claimed to be silly things, such as "not actually democracy." Jobley became the leader of the opposing party, and was given a 5-second banishment from the chat by pseudo-dictator Joel. However, seeing that he was the entire Opposition Party, he quickly remedied his old ways and joined the almighty country. The final decisions of officer positions are as follows:

The established country, known as West Nambia, has a flag depicting the president and prime minister, along with the sacred symbols of communism and memes. The country's official currency is the Meblyieuc Mowny (a reference to a quote from Mads, distressed as people offered to donate money to a GoFundMe account for her that was originally created as a joke) and the official animal is the seal.

For Praise's RAG's first RAG night, Praise surprised his RAG by taking them into a common room and revealing that they would be watching Bee Movie, which the RAG had joked about earlier. They were joined in the viewing by future honorary member Izzy Mendoza, who happened to be in the common room at the time. During Bee Movie, the group was extremely loud, heckling the movie and occasionally descending into existential shrieks of disbelief at the most implausible moments. This was arguably the most important meme in WNAM history, with Bee Movie and the group's comments on it being continually referenced and memed upon until months later despite being one of the earliest major WNAMemes.

WNAM's TiPsync was a performance of My Heart Will Go On, played on recorder.

All official members of the RAG were shoved into Ultimate Frisbee for the first evening activity, even though only two members actually signed up for the activity. Almost none of them wanted to play, so they started to talk about what they would be doing for TiPsync and came up with a few ideas. Later, either Thomas or Joel had the idea for a recorder performance of My Heart Will Go On. The group then bulk ordered recorders around 3 days before the contest, which arrived the day before the contest, and Thomas and James choreographed a part of the dance in their room.

After much stress and attempted planning, Mads and Joel somehow managed to have a Tipunion in the middle of Hurricane Matthew. While they were memeing in a bookstore, Thomas was sending images of an airport in the group chat and behaving all around cryptically. Hours later, after the two had said their goodbyes in real life and were on Skype, Abby snapchatted Mads an image of Thomas. Mads and Joel began screaming as they realized that Thomas flew to Abby's city to go to homecoming together. Neither of them told the group chat even though this had been planned for a long time. October 7th was then declared to be Tipunion Day.

In March 2017, Mads flew into Houston as a short trip during her spring break. There, she met up with Abby, who lived near Houston. Abby stayed in the Mansfield's hotel room, and together they embarked on many adventures, such as buying friendship bracelets from the Galleria, visiting the Houston Zoo and likely convincing passers-by that they were both gay, and being turned down for entrance to the Children's Museum as a result of not actually being children. They also had a brief meet-up with Jobley in which the 3 of them sat in a Whataburger for over 3 hours and memed.

In response to the aforementioned Tipunion Day incident, Joel and Mads decided against announcing the project they had been planning for the past few weeks. Instead, they decided to keep it mostly quiet and only mention it to the others under the name "Project Umami." From the announcement of Project Umami blossomed a number of theories regarding its contents, many of which were akin to conspiracy theories. In mid-November, 2016, Mads and Joel decided to create an Augmented Reality Game based around discovering the truth behind Project Umami. On December 11th, 2016, it was announced that the first clues to the ARG were set to be found within the next two weeks. As of yet, some of the clues have been found, but everyone except Mads and Joel did not care enough about understanding Project Umami. As a result, the ARG is in place but unsolved.

The number of inside jokes within WNAM, known as WNAMemes, is far too high for this list to be comprehensive; this will simply be an outline of many of the memes that are still known to have existed.

We Need A Megaphone

Arguably, the very first WNAMeme was the name of the group itself. A number of names were thrown around while sitting on the quad during the evening at TiP, and yet a good name could not be devised. At one point, one person sarcastically suggested the name "We Need A Megaphone," sarcastically commenting on the low number of people within the rag; only 7 were present, as Jason Corbett had yet to arrive. This ended up being the best name that the group could devise, despite around half an hour of brainstorming.

As mentioned previously, Bee Movie became a WNAMeme primarily as a result of the screening of it during Praise's RAG's first RAG night. While Bee Movie was already a meme in itself outside of WNAM, it held a unique and special place in the hearts and meme folders of WNAM's members.

During Praise's first day off, WNAM had to hold their evening meeting with Ryan's Rag. Instead of calling attendance from a roll sheet, Ryan simply asked each member of WNAM for their name. , instead of giving his real name, decided to say that his name was Jobley. The whole group, including Ryan, laughed at this, and Ryan proceeded to say that it would be "sad" if that were his real name. He was not aware that Jobley was a real name. This became Joseph's de facto name within WNAM.

In the period of time between TiP 2016 and TiP 2017, Joel stated that he needed to charge his phone. However, he mistyped, stating that he instead needed to charg his phone. Thomas then stated "charg?" in response to this mistake, and, wanting to make it into a small joke, replied "charg" in affirmation. Many other members then joined in, sending messages that only contained "charg," which resulted in a meme being grown.

Instead of typing the phrase "non-WNAM", Jobley accidentally typed the phrase "nom-WNAM". This resulted in a situation similar to that which occurred when "charge" was misspelled as "charg", although the meme fizzled out far quicker.

In the group chat during the period between TIP 2016 and 2017, Thomas, while attempting to type out "oh boy", accidentally typed "O sboy" instead. The typo phrase had been used as a replacement for the actual phrase by WNAM ever since.

I Finally The Solidoodle

Trying to express his relief at finally fixing the solidoodle, an incredibly buggy 3D printer owned by his school, Matthew, forgetting to use the word "fixed", posted "Hey guys I finally the solidoodle". WNAM seized upon this typo in order to create a meme, the post's memeability being amplified by the fact that most people in WNAM had no idea what the solidoodle was, making the sentence sound even more like gibberish.