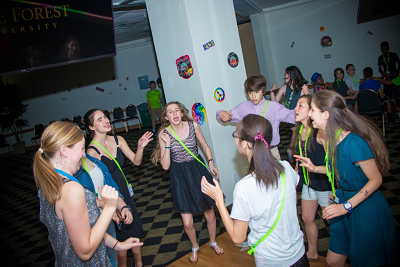 After being used for one summer in 2008, Wake Forest became an official TIP site in 2013. Wake Forest is filled with trees, gardens, and benches, as well as wide open spaces for ultimate. The past few years TIP has used Luter Hall for dorms. (2016 has used Collins, due to Luter undergoing renovations.) At Luter, 2 people are in a room connected to another by a private bathroom with a shower. Despite looking like a prison, the dorms have amenities like minifridges and microwaves not found elsewhere. This has led to those going to Wake Forest for their first and second years often complaining at other campuses.

The rest of Luter Hall includes kitchens and great common rooms on every hallway, air conditioning, and a large lobby split on three floors. The lower lobby has a ping pong table, prohibited soda machines, and media rooms. The Dining Hall and classes are located beside Magnolia Quad, which is a large field where many events are held. Magnolia Quad is only a 5 minute walk from Luter, and hosts 'MagFest', the main sporting activity. The Dining Hall has a great selection of all food groups, like fruits, grains, ice cream, protein, vegetables, and ice cream. There are no major lines or waiting, but it is sometimes filled with other camps. The classrooms are modern, filled with projectors, whiteboards, and air conditioning. There is a small dance hall and a large one, and the large one is better.

There is fast visitor WiFi at Wake Forest that requires a password. The administrative staff may or may not provide you the password but most Tipsters can hack into it by the end of the first week. Standard tradition is to go to a Greensboro Grasshoppers game an hour away and eat popcorn instead of watching the game, as well as getting on the visitor camera. If you go to Wake Forest you can go into Winston Salem for RAG meetings and you might drive into Greensboro if you have time for campus events and/or field trips.

SCROLL DOWN FOR DUKE TIP TERM 2 2017 hashtags/ inside jokes😁

The first Wake Forest TIPSync was held on the second Saturday, and Flo's RAG took home the prize. The highlight was Albert in a box and Zane hitting Flo with a T-shirt to the tune of "Sexy and I Know It". Colin's RAG fought valiantly but came up in second, with "Gangam Style", riding Ahad's extreme dance stylings. The staff ended TIPSync by performing CJ's favorite song, "22".

Wake Forest version of Quadfest was named "Magnolia Fest", or "Magfest" for short, after the magnolia trees on the quad. The Black (Flo, CJ, Jasmine, and Meghan's RAGs) team dominated the competition, winning by a thousand points (not verified). Events included Cheesy Poof Toss, Day at TIP, and Pudding Scoop.

This was Faris' dodgeball activity, held in the caged-in basketball court. No one died, but we did manage to pop a brand-new dodgeball.

The talent show started off the last night. There were many singers, a few dancers, and some Rubix cube experts (like John. He solved a rubix cube blind-folded). After the student performances, the instructional staff performed "Harry Potter Puppet Pals" and were awesome.