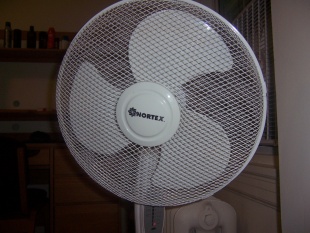 An Alternative to the lack of AC

Life without air conditioning was much cooler- a TiPster

Air conditioning is an easy way of differentiating between dorms at TIP programs. Specifically, Davidson College dorms have air conditioning, Duke East did not until 2012, and West dorms did not until 2005. Wake Forest University and Georgia Tech, the two newest campuses, have air conditioning. It can be very difficult to survive in a non-airconditioned dorm, as temperatures have been recorded upwards of 97 degrees Fahrenheit (Term II 2004, third floor of Brown dorm; it is possible that 2003, which saw a heat wave in the Durham area, may have topped even this) (It is of note, however, that TiPsters from Texas had no problem with the heat.). This does, however, make classes more attractive to TIPsters, as classrooms are airconditioned. {Edit: There was a recorded 104 degrees Fahrenheit on the third floor of Alspaugh, East Term 1 2010} Cognoscenti of AC recommend placing a large box fan in the window in order to make the whole room bearable or, failing that, keep the window open at all times. Pockets of cool air can be created at nighttime to make sleeping comfortable by buying an oscillating fan and placing it next to the middle of the bed so that its range spans the full length of the bed. These methods can easily make you cold and get rid of any wondering as to why you brought a blanket. Morning temperatures down to 76 were recorded at East II 2004. During Term I 2007, it rained all week at East. Tempuratures were in the 60s and 50s. Extra blankets were sent to TIPsters who nearly froze to death in sweatshirts and long pants because they did not bring anything for fear of heat. The begining of week 2, tempuratures reached the 90s, and all blankets were thrown under the bed. Arguably one of the best, if not the best way to beat the heat during the night is to fasten a sheet(either by tape or some other way)to a box fan, creating a baloon of cool air. This practice was invented by a very handsome young TiPster in Sean's rag during term 1 2010 at east. The practice rapidly spread through the second floor of alspaugh and quickly garnered the fond nickname "lube tube" because it abscured any "activities" occuring inside of it. Despite this, its best use is as temperature control.

As of 2005, West has air conditioning, as reported in the 2005 Summer Studies Bulletin.

The problem of the lack of air conditioning is further emphasized by living on the third floor. TiPsters know from extensive science knowledge that heat rises, and therefore the third floor is like a sauna (and great for the pores). The bathroom is indeed always very steamy in the most literal way. The temperature difference even between the floor and the bed is a few degrees, for the third floor takes all the heat from the bottom two floors, the roof, and the hot water pipes, and the brick just absorbs it all and radiates at night. Therefore the best way to sleep is to sleep on the wood floor in as little clothing as possible with the oscillating fan going over your whole body. This theory has been proven on numerous occasions. (edited by Jaclyn and Hanna Hope)

The 3rd floor of Pegram has reached over 103 degrees, as proved by Cat Hollander in TIP '08. Pegram has been proven to be the dorm with the highest temperatures, most likely because all breezes heading in its general direction are blocked by trees, Alspaugh, or the auditorium, making Pegram on average 5-10 degrees warmer then the outside temperature, with the third floor an average of 10-15 degrees warmer.

As of 2012, Duke East also had air conditioning (and life would never be the same).

An ingenious invention thought of at TiP East, Notably by Josh Heller, terms I and II 2010, which simulates the conditions of the much sought-after AC. To create a Man Cave, one must have a bed that is elevated much above the floor (the beds on stilts). First, remove the mattress from the top of the bed, leaving the springs exposed. Next, place the mattress under the bedframe (those with beds too low to the ground may try and flip the frame over, but placing the bed on other devices, e.g. dressers and desks, to elevate the bed is not advised, Sugg). After ensuring that one can safely and comfortably fit on top of the mattress, under the top of the frame, place a box fan or any other fan on top of the bedsprings, facing downward towards the mattress. Adjust as needed for comfort. Using this wonderful device can simulate air conditioned conditions, so much so that some TiPsters have exclaimed that the Man Caves are too cold, which is exceptionally notable on East Campus.