Criminal Trial Advocacy (CTA) is a class taught at Duke East terms one and two as well as at Rice University during 2018 terms one and two. It is most always taught by a Don Donelson, and has had multiple different TAs in its history. Students in CTA learn about different aspects of the law, and the knowledge they gain proves beneficial in the final project, a mock trial. Many jokes can be made based on the knowledge gained in this class.

The class of 2010 Term Two is specifically notable, not only for their generally brilliant lip sync performance (which will be explained later), but also for the general amount of inside jokes that only tipsters that were involved in the class would understand. 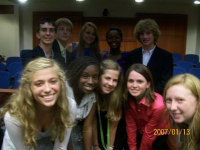 “Peter, if you bring a cell phone into that courthouse, I WILL FRISK YOU!”- Chandler

“Once my dad threatened to buy a leopard print thong, just so he could jump out in it and scare people.”- Thomas

Jackie- (being a police officer)“Sir, do you know how fast you were going?” Steve-(pretending to be drunk)“I don’t know, warp three, maybe warp five…”

Emma- “In your affidavit you claim that “you twist the facts” or “will do anything” to make a sale. Is this true?” Jackie- “Yes, it’s my job as a car dealer. You’re a lawyer. Isn’t it your job too?”

“WWRPD- what would a reasonable person do?”- Debbie

“In New York, protect your daughters, not your purses.”- Don

Michael with bucket (Double Meaning)- Meaning 1- Bucket was a rubber ball that was printed to look like a penguin, which happened to be the mascot of Emmanuel’s RAG. Each member of the RAG took it to class at some point during the term. On Michael’s days, he brought Bucket to the classroom, where Bucket may or may not have been regularly abducted by classmates.

Meaning 2-Bucket was the Vermonster bucket that Michael and friends had when they completed their Vermonster. Michael carried it around with him like a pet. He also wore it on his head like a hat sometimes.

Michael and Colin’s “conversations” from across the room- Non-verbal communication is a time tested method for communicating with people who are deaf, mute, or in situations where talking is not permitted. In this case, yelling across the classroom was highly frowned upon. So Colin and Michael made faces and hand gestures at each other from across the room attempting to communicate. No one really knows if it was successful since no one had any idea what they were trying to say.

Thomas’ wearing of a strapless dress to play ultimate Frisbee- WASW is an honored tradition to be upheld, as is Frisbee. So on that fateful 2nd Wednesday of TIP, it makes perfect sense to combine the 2. The Frisbee playing guys saw no reason to take off the skirts and dresses they had donned for the day, so they didn’t take them off. Which meant that when it was Frisbee time, the Frisbee had to be played in their girly attire. This wasn’t a problem for most of them. Except Thomas. Because Thomas was wearing Emma’s strapless dress stuffed with some socks (which does not substitute well for having actual boobs to hold up a dress) Jackie had to “fix his boobs” all day long while he wasn’t running around, so just imagine how ill-suited that dress was to physical activity. Basically, very ill-suited. His dress was slipping and sliding all over the place while he played Frisbee and it was just a tad over exposing.

Psychology people telling us to shut up- Duke psychology department is mean (at least when overly intelligent teenagers make a lot of noise in the hallways where they work day in and day out for 3 weeks during the summer…) I think they're just mean.

Airhorn used to wake people up- When you have teenage boys waking up at 7 in the morning, you’re bound to get a few of them falling asleep in class. Steve was of course the most common dozer. And on those times when Steve fell asleep in class, Don took his Droid phone and the Air horn app he had and would blast the air horn in Steve’s ear. It was quite the effective wake-up call.

Class in Pegram Dorm- Instead of having class in the classroom like a normal class, we sat in the common room of Pegram (the TA and Instructors dorm) with the AC and really comfy couches. Which of course caused Steve to fall asleep more often than usual.

Debbie’s hypothetical situations- funny situations used to demonstrate the extent of laws (often times ridiculous and humorous). For example: Mike Tyson has a knife and is in a room with you with no windows and no doors. He wants to cut your hands off. You have a gun with one bullet. Can you shoot him and use the excuse of self-defense? Where do you shoot him? Yes, you can shoot him anywhere. The best place to shoot him: in the groin.

iBurgle- Burgle is in fact a word- meaning to burglarize someplace. (Burglary is defined as breaking and entering the dwelling of another at night with the intention of committing a felony therein) This was the original design for our t-shirts. A burglar with a bag thrown over his shoulder tip-toeing around with an iPod in. but since that couldn’t be done in time, it didn’t happen.

Jeopardy games- played for team points. Team $WAGG was doing amazing and was in a huge lead until Steve bet all our points and lost them

The class visit to the courthouse and wake forest- we went to the Durham Courthouse and watched sentencing trials (real ones) which were pretty intense. One of them had a woman with her crazy looking psychiatrist claiming she had multiple personalities. It was interesting to say the least. Jackie started crying during the trials because she was the sentenced convict waving goodbye to his mother, girlfriend, and son. But she cries very easily and it was an emotional moment so no one should have gotten on her case.

Don, Steve, and Jakob’s Lip Sync Performance! To the song “Poker Face” by Lady Gaga Don wore the green wig, Jakob in Yellow and Steve in Pink. They wore a collaboration of clothing and makeup from Emma, Jackie, and Debbie, who were in charge of clothes, hair and makeup. This lip sync performance was their punishment for accidentally locking themselves out of the classroom by not propping the door open. Jackie and Emma choreographed their dance with the help of dance friend Saara. Jackie made their props of giant playing card with a Lady Gaga emblem on them and she did a very good job. Their performance was a crowd favorite, except they were not eligible to place because they had an employee (instructor Don) performing with them. But they won 1st in the hearts of TIPsters.

The official class shirt was blue with “ Basically…” written in white on the front and “don’t be a creeper” written in white on the back with the campus, term, year, and class info. The quote “Basically don’t be a creeper” was said by Jakob when referring to Don’s explanation on where to stand during direct-ex vs. cross-ex in relation to the jury. Because an attorney does not want to come off as a creeper to the jury. Jakob had an undeniable obsession with creeping, being a creeper, and making creeper-like faces since he had never heard the term creeper before coming to TIP.

The only Fourth year- Stephanie!

Michael had that one day where he argued with Don about privacy. Which is how the Hellen keller issue came up.

Wear a skirt Wednesday was the same day as our oral arguments... as if anyone could be taken seriously.

Oh, this isn't a joke, but we did manage to make Don cry with that... card.

If a mall cop ever touches me, I will own that mall

How many Miami shirts does Don have?

Being shot with a banana

"How many doors does a Maserati Quattroporte have?"

Getting arrested for your own law

-The chairs bounce if you shift your weight on the back of them.

Capones: this team won almost every Jeopardy game, and was the only team smart enough not to place in all points for the final Jeopardy (Final Total = 5,100)

"I'm not in the Russian Mafia" -David

"Quick, tell me where the giant gaping hole in my thing is" -Parker

"You're just out for shits and giggles, breaking into houses for fun" -...

"He's already in her pants" -Parker

"Put deodorant on your fingers and forehead" -David

"Damn you Haylee, you and your stupid quotes" -Parker

"Nobody should cheer for Hitler!" -Parker

"If you don't raise your hand you don't exist" -David

"Evan is a lying bastard" -David

"I can bully all of you" -David

"I find it funny that when someone falls asleep and I wake them up, they immediately put their hand in the air to answer a question. Good job. Immediate reaction." -...Don

"What the heck is Wifi." -Faith

In trial two, with part of CTA and some staff as the Jury, the Defense won with a 5-3 vote, however on points (assigned by Don), the Prosecution won 105-103.

"You can't kill someone when they're already dead." - Don

"Bring the crack cocaine and your friends." - Don

2015 was a particularly great year. Especially with the welcoming of the new TA, Maria Labella. Also, it was quite the emotional term. On June 26th, 2015, the Supreme Court ruled 5 to 4 in favor of legalizing homosexual marriage in all of the states. In the middle of the final Mock Trial, Don asked the judge (Mr. Burger) for a brief recess as he cried with tears of joy. All of CTA bear-hugged Don as it was a very emotional moment for all of us. This was possibly the greatest Term ever to take CTA. We were and are the best TIP fam yet. Teams included: D.H.H. (Don's Happy Hurricanes), Donye West, Entangled Tangelos and Legion XIII. Donye West ended up beating D.H.H. for the title and their rewards was the Vermonster from Ben and Jerry's. They completed the Vermonster in 12 minutes and 24 seconds.

"I wanted to be one with my spirit. So I went to Nordstrom." -Don

"Give me a stick of Gum asshole." -Don

That entire evening session when we had the debate about whether or not Chris's tardiness would lose his team points.

While eating 1/2 the Vermonster, "I burped so I can eat more" -Ethan(the real MVP)

"Sanya, are you asking me a question?" -Don

"I love all of you!" -Everyone

"It's because I'm brown" -Evellyn 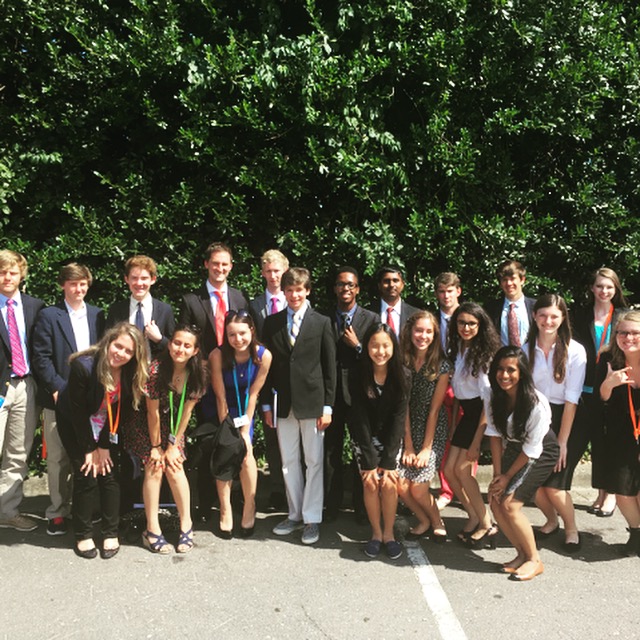 We don't need a lot of words because it's not possible to explain our class in words. #donfidence

You know what happens when you make assumptions...

Space_Bar - Caroline, Jeffrey, Will, Zoe, Robert (for the first half)

D.A.R.E - (the Pope probably wouldn't do crack even if he really wanted to)

"Kathryn the bees are dying at an alarming rate." -Sadie

"I already have an HDMI cable. I need a computer with an HDMI output, you stupid brats."

"PORTER YOU SON OF A BITCH!"

"Are you fucking dumb?"

"You guys are all assholes"

"She thru up in the vermonster bucket tf"

We are the people of Group C

What are the odds?

Animals are innocent (DON'T BE SPECIESIST)

There is no Don but Don, and Kathryn is his messenger 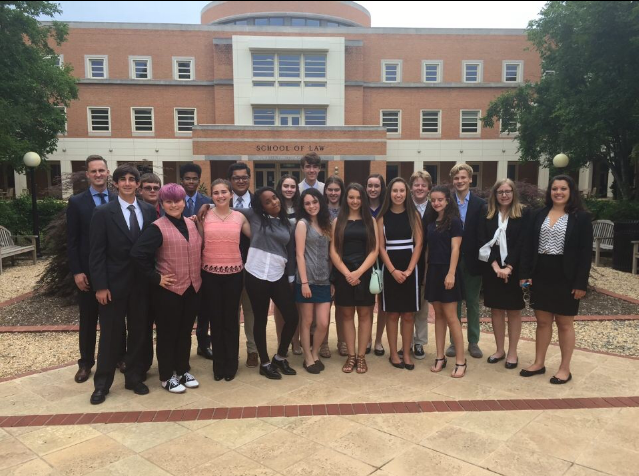 A separate page has been created here for Term 2

The best class ever!