Few is the Duke West house where TiP now resides as of 2016, due to construction on Kilgo, the previous house, in 2015. Few can be described as a "dungeon," as the halls are long, narrow, winding, and, for the most part, windowless. It includes the GG and HH houses, which connect on the second and third floors.

The building could be described as a confusing, colorless maze. There are several bathrooms spread across the halls, including two gender neutral ones, which may be the only positive about the place. There are not very many water fountains, and the ones that do exist are not very conveniently placed, as they are usually at the end of the hall. 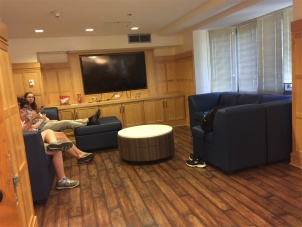 One half of GG2, the second floor common room.

Each Few common room contains couches and chairs; some have televisions and a kitchen, and one even has a pool table. However, the rooms are usually obnoxiously loud and over-occupied, as they are the only real place that Tipsters may hang out unsupervised. Even then, there are usually RCs lurking nearby to make sure nothing untippropriate, like front hugging, is happening. At first, they are also very hard to find, despite being the only place to go during free time, so shouts of "where is the common room?!" are to be expected. However, since Few is a square, walking around the square until you find a common room is a tried-and-true strategy. 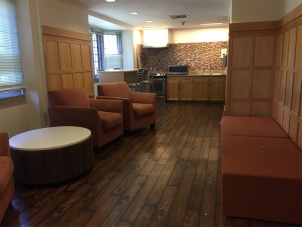 One half of GG2, the second floor common room.

The naming scheme for the common rooms is simple, with the name of the house (GG or HH), the floor number, and "01," such as in "GG201." However, most tipsters shorten the names to just the house and floor, such as "GG2." In 2016, the available common rooms for Tipsters to use were GG1 and GG2, so they were always crowded; in 2017, the available common rooms were HH1, GG2, HH2, and GG3, so crowding was less of an issue. GG1 was used as a staff only room that year, which was sad for tipsters who felt nostalgic about their time spent in GG1.

Common rooms are available during free time, and for RAG nights that involve watching a movie, RAGs will often choose one with a TV. They are also frequently used for evening activities that require TVs, such as karaoke or Mario Kart, or RAG meetings for RAGs lucky enough to have a common room on their hall. 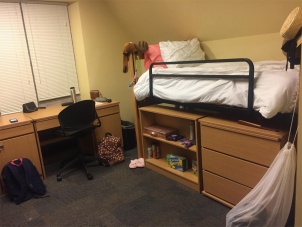 The dorms are a decent size, with at least some floor space left with all the furniture. Most rooms contain two beds, two dressers, two shelves, two desks, two small cabinets, two swivel chairs, and two walk-in closets. Some of the larger rooms only have one walk-in closet, but it works out alright. There are also two trash cans (aside from the two residing Tipsters) and one recycling bin. All of the rooms are organized differently and some tipsters may be stuck in tiny rooms while others have quite spacious ones.

In some of the dorm rooms, the raised beds are placed in a position in which it is impossible to get into them without standing on the provided swivel chair, an action that is most certainly not safe for work. Tipsters have many other ways of getting into these beds which include the following: climbing the ends of your bed like a ladder, getting a running start and jumping into bed, awkwardly hauling yourself up with the sheer force of determination, just taking the mattress off of the bed and sleeping on the floor, and many more creative ways.

In 2015, there were no railings on any of these insanely high beds, which led to some problems for tipsters. One unlucky fourth year during term 1 fell out of his bed in the middle of the night and badly injured both of his wrists. Not waking up his roommate, he went to tell his RC what happened, and supposedly passed out as he opened his door. This required immediate medical attention and he had one arm in a sling and the other in a cast for the rest of term. (Someone who attended this term may want to edit this if they remember it better.) 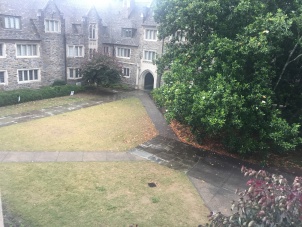 The grassy area is where the dances take place. The grass is decimated at this point by all of the jumping during Darude Sandstorm.

Few Quad is a large, square-shaped quad surrounded by all the dorms occupied by tipsters. This is generally where dances are held, similar to when they were held in the Kilgo Quad. It includes a grassy area where tipsters can be seen playing frisbee during free time. Many evening activities take place here, along with other events, such as TiP Sync and the Rap Battle in 2016. There is a magnolia tree in the corner where fireflies can be seen during the evenings that is often adorned with decorations for dances, but it is off limits to tipsters. The only known exception of this rule is when the RCs hosting the campfire stories activity allowed tipsters to go collect sticks so they could roast marshmallows. (This was also the activity where Roman ran out from under the tree screaming as tipsters told a story about his epic battle against the Anti-Roman) 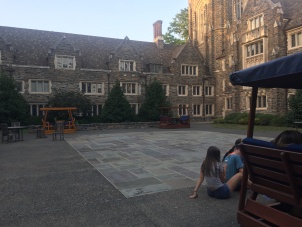 The swinging table benches can be seen.

FF Quad is the other Quad surrounded by tipster dorms at Duke West. The ground of the quad is concrete, making it a great place to practice dances for TiP Sync. The quad is also home to swinging table benches, which roll back and forth on a track soothingly. Many evening activities meet here; fourth years also sign out for the Bryan Center from this area. Many Tipsters play frisbee on the concrete or card games on the benches while waiting for activites to begin.

The Main Quad is the quad upon which large activites, such as Quadfest, the frisbee tournaments, and the "carnival" day of Term 1 2017 are held. It's a large, grassy quad with several concrete pathways spread throughout. There are trees in the corners of one large section, which serve as the bases for the four color teams during Quadfest. The Quad itself is located in between the Few building and the area containing the West Union, the Bryan Center, and Penn Pav.