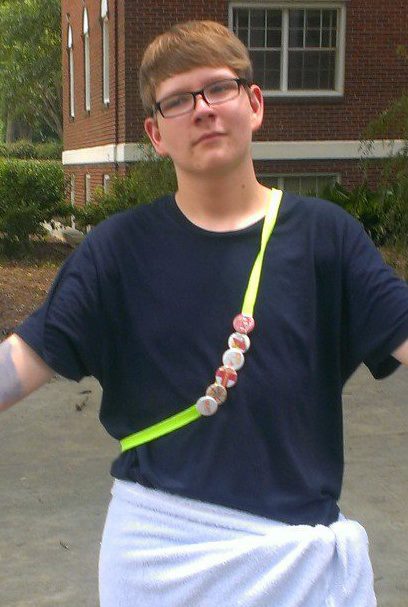 Jarrad in his Blue Team Outfit.

Jarrad lives in Palm Coast, Florida and was Born in Portland, Oregon. He's a hardcore gamer and avid Kingdom Hearts fan. He has been told he's got nice shoulders, which he takes pride in. Jarrad is a peculiar TiPster, being able to hold his own in intelligent conversation while still being able to make friends with anyone.

Jarrad went to ASU Term 2 2011 where he took Science on The Appalachian Trail. He wasn't very well known there and was kinda shy. His roommate, oddly enough, was one of his best friends from school Bobby Oehl. Jarrad was known to never get his first choice of evening activity all term, on one occasion him getting an activity he didn't want led him to sprain his ankle. He had to be on crutches for the rest of the term. He was on Blue Team for Pitfest and they took home the win.

Jarrad went to UGA Term 2 2012, there he took Cryptography and was one of the amazing Cryptobabies. He roomed with Tyland Duggins. This year he was still very shy and only made a few friends. He was always a 3rd wheel especially when people in relationtips were involved. Again he never got his first choice in evening activities.He was in Chris' RC group known as "The Dirty TiPsters. Chris had to leave halfway through the term leaving Cassidy as his RC. He was on the Green Team for DawgFest, they would have won but they were docked all sportsmanship points for somebody calling another tipster fat. Jarrad had many disputes with Chip Allen but in the end all was fine between them.

Jarrad went to UGA Term 2 2013. He took The Brain. This year he finally emerged from his shell and made many friends. He roomed with Liam Kirchner and was in Geoff's RC Group. He was one of the only third years in his group, leading him to become friends with all of the 4th years that term. Jarrad was part of history this term in which his RC group won three of the four major events of the term. They won Dawgfest (Blue tied with Red, another first) LipSync (With their amazing rendition of "Any Way You Want It)and NerdQuest (with Jarrad taking home Porkules). This year Jarrad was well liked around Term and was known for his Minecraft and Red Hot Chili Peppers shirts. He was also known for being able to make anyone laugh at any time. Whenever he was around his roommate from the year before, Tyland Duggins, he would say something explicit to him, in which Tyland would reply with something similar. After they both said something mean, they would say "I love you" to each other. Oddly enough, outside of these few confrontations, they never really talked.

During DawgFest, in the Dragon Tag event Jarrad and Anthony Gagliardi were the last two on their team. Jackson Clement, a member of the Yellow Team, lunged for Jarrad. His lanyard was ripped from his pocket causing all of his buttons to fly into the air. All six buttons were lost along with a pair of shorts which were ripped all the way down the side. Spectators said it was a beautiful sight, resembling fireworks.