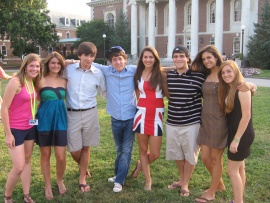 The Bosses and some girls at a dance. From left to right (guys): C, Sunshine, John

The Bosses are three members of the TIP class of 2009 who began their rise to TIP infamy. The Bosses spent their time at Duke East living in the image of Peter Sloan, Will Harris, and the Trinity. Their infamy comes from a combination of crazy dance moves and fluency in TIP lore. When describing The Bosses, one of the hottest girls in TIP history said, "I don't think I ever saw one of them without a girl."

Two of the three members come from Blake Seymour's G.O.A.T. RAG of 2008, which has much of its own infamy. The third member's solo shenanigans as a third year come close to matching the accolades of the entire G.O.A.T. RAG. Each member comes from a different state: Tennessee, Georgia, and Florida. At any time at TIP, the Bosses would often be seen hanging out with the most beautiful female TIPsters or engaged thinly veiled romances with one another. The Bosses participated in the 2009 Lip Synch with two of the Alterna-Bosses, in which they serenaded various females to the song, "I Want It That Way." They unfairly received third place. The video can be seen here.

The name, "The Bosses" arises from a (popularized largely by Youtube) internet meme, performed by the musical comedy group, The Lonely Island. This phrase entered large circulation after the 2009 Quadfest cheer read by C, in which C would state something and the Bassett warriors would yell, "Like a boss!" 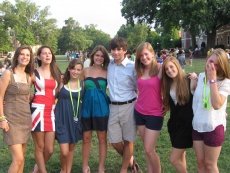 C is arguably the leader of the Bosses. For most of 2009, C found himself in a RelationTIP with Scout Henninger. C's claims to fame include the "Peter Sloan Scandal," plotting to bring down the Benjamin Duke statue. Although not a member of Blake's G.O.A.T. RAG, C's engaged in shenanigans that rivaled the greatness of any entire RAG during the 2008 session. In the Student/Staff Game, C served as the head coach, wearing a beautiful sweater vest. He led the East students to a victory for the first time in eight years. 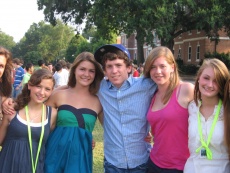 Sunshine and some ladies.

Michael "Sunshine" Sikes is from Tampa, Florida, and was at TIP for the full four years. Sunshine was a member of the 2008 G.O.A.T. RAG. The nickname "Sunshine" has various stories describing its beginning. Perhaps Sunshine's yellow watch, or home state (Florida) or Fiona Schlumberger's "Little Miss Sunshine" shirt that led to the name. In any case, Sunshine has become a TIP legend for his questionably moderate running shorts and his promiscuity on his last night as a TIPster.

Throughout his TIP experience, Sunshine was involved in a highly-publicized RelationTIPs with Fiona Schlumberger at Davidson. However, rumor says that he hooked up with three (or more) girls on his last night as a TIPster. Although there are more than five witnesses and picture evidence, the rumors will never be confirmed. In his fourth year, Sunshine was hardly ever seen without a female by his side.

Let it be known that Sunshine was the first TIPster to ever master the skills brought fourth in Neil Strauss's novel, The Game, using the techniques to attract women at all times. Update: Sunshine is now a member of the jamaican bobsled team (i cant post the picture, but understand it as fact) 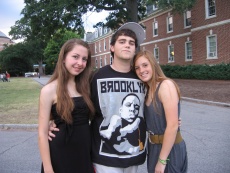 John with of the Muffins and a hot redhead.

John Vaughan is from Marietta, GA and is one of the most conservative people to ever come to TIP. John was a member of the 2008 G.O.A.T. RAG with Sunshine. He was a two year TIPster, yet is believed to be the greatest ping-pong player in TIP history. Unlike the other two Bosses, John was never involved in a legit RelationTIP. John went by the nickname, "White Chocolate," in his third year, yet he was mostly called "John Vaughan" because his name rhymes. In his time at TIP, John established himself as the white "Hitch," hooking up many of the RelationTIPs that worked out and helping timid second years find the courage to approach the girl of their dreams. Along with alterna-boss, Chester Chambers, John helped coordinate The Arthur Kiss.

During the Swine Flu craze of 2009, John was the first officially diagnosed case. Rather than going to live in Giles, John went home to Atlanta for the week and dedicated his life to Tipwiki for those days.

Prior to the chaos of the one minute fourth year speeches, John came out on stage alone and declared his love for Kelsey Cannon. The room was rather quiet after the end of the last tradition exchange and John broke the silence by yelling "I LOVE KELSEY CANNON."

The three "Alterna-Bosses" are friends of The Bosses who acted as fill-ins while one of the main Bosses was away on a flirting mission.