Trey "The Milkman" was a fourth year fourth year who attended ASU term 2 for his first year, and UGA term 2 for every year proceeding. He was known for his ART, and legendary talent show performances, as well as his hype for the dances and passion for his fellow tipsters. During Trey's time at TiP, he tried very hard to convey his passion and love for the campus and people around him to everyone, and inspire TiPspirit. By the time of Avent's fourth year, the people at UGA TiP had become a family to him, and the bonds he formed brought connection and value that will last a life time. 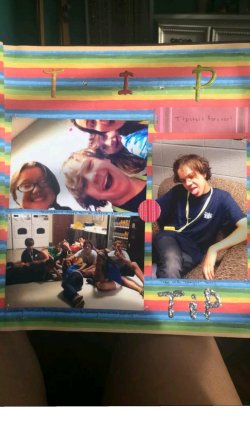 Assorted pictures of Trey at App State, arranged by Megan Wagner. The bottom picture is the only documented photo of the group in the laundry room on the famous last night

For his first year Trey went App State term 2 and took the course Creative Writing. He met 2nd year Will Nichols, who he would go to tip with for three years proceeding proceeding; they became very close friends. He also met 1st Year Jack Martha, whom he is still friends with today- hopefully they will be attending their final year together. He also became very close friends with Rickey Plunket, Edwin Thompson, and Chris Pressy (Curly-Hair-Chris). The aforementioned tipsters could frequently be seen patrolling stair-mountain together. In his class, Trey sat next to and became friends with Quentin, Jack, and Emma. He became relatively close with all three, but never really hung out with them outside of class and lunch. He had fantastic teachers in the form of Pete and Rachel, who both had a huge impact on his direction throughout life. The class inspired him in more ways than may be mentioned here. Trey also participated in TiPsynce with Will Nichols and the RC Bora Günay, performing the song Call Me Maybe. His RC this year was named Deacon, and they had a great RC group with many of his close friends at the time, including Reuban Profeta Trey went through two crushes during the course of his first year, both of which were unsuccessful. First there was Ann, he met her after she dared him to drink a concoction of horrors derived from the ASU cafeteria. It was hard, but he eventually worked up the courage to ask Ann to the second dance- to which she replied, "oh, I like someone else," forever crushing his first year heart. Next there was Brittany. Brittany was a distant crush, even though Trey would barely talk to her, there was no doubt that she was the one; however, his dreams of Brittany were forever destroyed when she began to elope with Diego in the final 3 days of tip. On the last night of the term, some of Trey's closest friends (Megan Wager, Will N., Chris Pressy, Jack Martha, Anna Medley, and others) gathered together and watched The Rocky Horror Picture Show in the laundry room; it was a great way to end the term, and one of Trey's best memories from TiP. Despite the heartbreak (all to Will Nichol's amusement), first year was a great first experience with TiP for the Milkman, and he will treasure the memories and friends he made there forever.

For his second year he went to UGA term 2, and took the Inspired Writer course(RIP- we ran that class down like a pegausus in a flame of glory). During his 2nd he became very good friends with the 3rd year Will Limehouse through their Inspired Writer class (RIP), and the two are still best friends to this day. He also became very good friends with 3rd years Thomas "Tombom" Williford, Jaxon Wilkerson, and 4th year Andrew Mull. He had a relationtip with 4th year Olivia Mumaugh, and even though the relationship didn't work out (although they did continue on for several months after tip) a lot of good came from it, and it was a great first experience for our humble hero. Trey received his first kiss at the baseball game, but beyond that, we shall not mention their relationship here- if you want to know some of the intimates, try contacting Thomas Williford (and beware the end of the hallway on the second floor, it is a disgusting place). Although he didn't realize it at the time, Trey had a great RC group under the tutelage of JD with Tipsters he would become very close friends with in the years proceeding like Chris Gregoire, Josh Brandon, and Emmett Davy. Trey became very close with his friends this year, it was the first time that he realized the people he was with at TiP were more than just three week acquaintances, they were his family. In particular, Thomas Williford inspired within him flaming passion for TiP, and the meaning of TiP spirit; the two frequently referred to the other as their "brother". Trey also fostered an extremely close relationship with the aforementioned Will Limehouse, and he continued to grow even closer with his old friend Will Nichols. He finished off this wonderful year with the first of a legacy of talent show performances with Jaxon, Andrew, and another fourth year named Dan; it consisted of the beautiful verse of Jaxon Wilkerson, the poetic throat singing of Andrew Mull, the elegant bed-sheet holding of Dan, and the spot on exegesis by the Milkman himself. Overall second year was probably the best time of his life. All the Tipsters at UGA during Trey's second year went out of their way to welcome him into their family and make sure that he had one of the best summers of his life.

For third year he returned to UGA in a blaze of artistic glory, he took the The Brain, where he met Jordan Ogrinc, Sloan Wilson, and Chris Gregoire; the four of them became very close, and Trey and Chris even established UGA's first official Gentleman's Club. He also became good friends with the legendary Sung Yong-O (Kill 'em All) via Chris. Chris and Trey would go on to complete the Vermonter challenge in a legendary 10 minutes (with some help from their classmates Sloan and Shikha). He also became very close with Caroline Cox, who won't stop snapchatting him. During the last week and a half or so of this term, Trey also became better friends with Josh Brandon, whom he had known since first year, but was not previously close with. Jack Martha and Trey also became much closer this year; the couple were very happy about being reunited again, and found that they had more in common than they knew, particularly their interests in art. 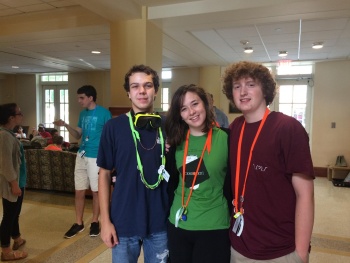 Trey with Sloan Wilson and Will Limehouse (Slimehouse) on departure day.
Trey finished off the year with another exciting talent show, this time consisting of more poetic verse from everybodies favorite poet, Jaxon, excellent throat singing by Will Nichols, inspiring pineapple holding by Madux Price (it was his birthday), philosophical chair-sitting by Will Limehouse, beautiful brush modeling by Jack Martha, and absolutely disgusting gummy-bear consumption from Thomas Williford, and appetite satysfying chanting from the Milkman. At the end of the performance, the whole crew left through Jaxon's metaphorical birth canal, comprised of Trey's bedsheets which Dan had held up the year before, The Milkman left this performance as he entered the world: a screaming amalgamation of all God's hate for the world. He made quite a few other close friends during his third year as well, notably, Teddy Todaro, Kmill_03, and somehow Mackenzie Smith- well not technically, but still.

From left to right: Trey, Limehouse, Martha, and Madux performing ART.
At the end of the night he was passed down the Party Glasses by Thomas Williford; although, since Thomas had broken the glasses, and then subsequently lost them, he was given a pair of goggles as a temporary replacement. Overall, third year was a great experience for Trey: he strengthened and formed many bonds that would solidify the meaning of TiP for him, and inspire him to give back in his fourth and final year. 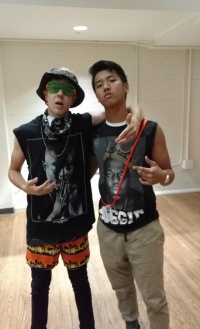 Trey and Tey together at the first dance sporting their decades (trap) attire, Avent was also wearing the Boxers that the 2015 fourth year Jaxon Wilkerson gave him on arrival day 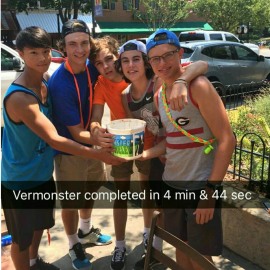 I, Trey “The Milkman”, of ART mind and milky body hereby bequeath what remains of my time at TiP to the following. To Kenny, I leave the essence of UGA frisbee; Jackson, a blue hand; Ethan Hat, all my knowledge of fopo, and passion for Kendrick Lamar; Jeffrey, my dance moves; and to Jonathan, I leave my hype, although you have enough of your own already. To Savage I leave the number 8, a debatable basketball, and the future of UGA; to Jacob, I leave my faith that you will carry on our legacy: you have more TiP spirit than anyone I have ever met, and I trust that you will take care of my home well next year. To Danny I leave a Blue-Eyes-Black-Dragon; Tey, the three years you never got; Robert, a fantastic taste in music; Katie Marie, your induction papers to the gentleman’s club; Joe, a sweatshirt; Coopersmith, a new water bottle; Alex, all of my copies of seinfeld; Meghan, a sensual picture of George Costanza, and The Catcher in the Rye; and Marvin, the best wrasseling there ever was in Louisiana. To Emmett, I leave a Walmart card, and the wolfpack; to Caroline Moore, I leave an orange of the day and IB; to Rachel H., I leave a Chik-Fil-A cowsuit and a pikachu; Chris P., a better friend than myself, and our beautiful memories of stair mountain; and to Rebecca I leave ART, Andrew Saulters, and our memories of Inspired Writer 2014 (RIP). To my brothers who mean the world to me: Jack C. I leave you the memory of the 2015 fourth years, and my confidence that you will be a greater legend than I ever was; Sung I leave you my awe of your frisbee skills, muscles, and all the joy you’ve brought me as one of my best friends; Brandon, I leave you the title of nicest guy in the universe, and all of the happiness I’ve experienced as your roommate; to Martha, I leave nothing, because I can give you nothing greater than the life-changing friendship you have given me; and to Chris G., I leave all of my memories of TiP, and all of my love, you bring more joy into my life than I can possibly express here. To Caroline Cox, I leave myself, as so much of me has been made by you, and so much of what I love comes from your existence. You are special to me, and I love you (no, we are not dating). To TiP, I leave the last four years of my life. Many of the friendships you have given me will fail, and my memories of you will fade, but the feeling you spawned within me on that first July of 2013 will never die, and for that I am eternally thankful. And finally, to the returning green lanyards, I leave my home, because even though I will miss it immensely, I don’t need it anymore, but you surely will.