The Back Dorm Boys, or BDB, were originally formed by Bora Gunay, Dart Ball, Riley Bollinger, Jacob Hoyt, and Chris Ballinger, at UGA Term II 2010, when the group was third years. This group led the 4th year serenades, as well as performed Backstreet Boys songs for the 2010 and 2011 lip sync at Duke Tip UGA Term 2. The Back Dorm Boys or BDB were passed down to Robert Ledbetter, who brought together Mark McGuire, Willie Barbuto, Chris Buehler, and Raj Kashyap for the 2012 Term. They continued the tradition of serenades, as well as performing "Everybody" in the lip sync and placing third. The BDB traditionally wears khaki shorts and a plain black t-shirt while performing in the lip sync. Anthony Gagliardi received the BDB in the formers' wills.

The same members returned for their fourth year. The BDB led the 4th Year Serenades. The BDB was passed down to Robert Ledbetter at the end of UGA Term II 2011.

Rob Ledbetter, having received the BDB, for his fourth year, invited four other Fourth Years to join him as a BDB. These five led the Fourth Year Serenades (When there were any...), led the staff student frisbee game, and showed a strong brotherhood. They performed "Everybody (Backstreets Back)" for the lip sync at UGA Term II 2012 and placed third. The BDB each passed down the tradition to Anthony Gagliardi in their Fourth Year Wills.

Anthony had passed down leadership of the BDB to Gage, but Gage did not attend TIP for his fourth year. He then gave the position to Joey publicly on their term's FaceBook group. In honor of Gage, there were only four performing BackDorm Boys, to the song "Straight Through My Heart", which was chosen because of the period of time there were only four Backstreet Boys. Though they did not place, they knew that they had succeeded in upholding a tradition and honoring a friend. It was passed down to Connor Buehler at the end of the Talent Show.

Connor led the BDB and performed the song "As Long as You Love Me" They did not place but continued the tradition. It was passed down to Chris Gregoire at the end of the Talent Show

Chris Gregoire led the Backdorm Boys in the song "We've Got It Goin' On". The performance included notable choreography, audience involvement, and amazing back flips by Sung Yong-O. At the end of the song, the four other members of the group lined up, and Sung did a breathtaking flip over them all. The judges created a fourth place for them, even though it was widely considered that their lipsync was by far the best. At the talent show it was passed down to Jonathon Kirkland 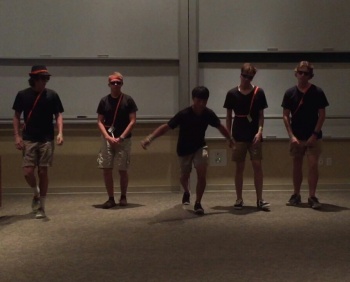 The Backdorm Boys of 2016 performing; members from left to right: Chris, Brandon, Sung, Trey, and Martha

Savage led the BDB in a very hyped and well choreographed performance of "Everybody". The performance included vigorous hand pumping, arm waiving, and a lot of body rocking. It was for sure a tip sync for the ages. The Backdorm Boys tradition was passed down to very worthy Jake Huggins at the talent show, who will for sure do all the previous members proud in 2018.

Jake led the BDB in a heartfelt performance of "I Want It That Way". The dance started with Jake standing by himself on stage and over time the other members filtered onto the stage. The performance reached it's climax when Jack Campbell leaped into the arms of the other members for the crescendo of the song. The member then ran into the crowd, electrifying the audience. Each member had a solo that tugged at the heart string of the camp. This tradition was passed down to Henry Skeen at the talent show.

Henry led the BDB in a stellar performance of "As Long As You Love Me". The dance started with a proposal from Garrett to Kenny and only got better from there. Garrett, Nik, and Kenny each had exciting solos where they wowed the crowd and disappointing the Giacomo. The BDB finsihed the song in each others arms, making it a truly beautiful moment.