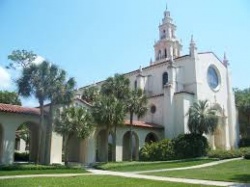 Rollins College, founded in 1885, became a TIP campus for the first time in 2015, where it hosted a Term I and II for that year. The courses offered there didn't have any set theme, ranging from Medical Science to 3D Printing. Due to being a fairly new campus, not much is known about it, other than what's kept in the minds of the TIPsters who attended. The secrets of the campus could be locked away forever... 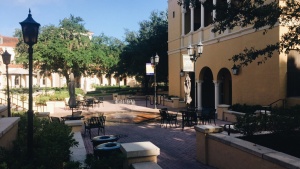 The fountain area outside of the Rollins dining hall

With its slight overbalance between nature and buildings, the campus is utterly cluttered with wildlife. It has an abundance of lizards, squirrels, and various types of bird of prey. You really can'y go anywhere without seeing some sort of wildlife. The weather is hot, humid, and nearly daily afternoon thunderstorms. This is unfortunate because it causes tipsters to not be allowed to leave the building during the thunderstorms, although creative solutions are a TiP specialty. The buildings mostly look the same, aside from structure. McKean Hall was where every student attending TiP was housed (how they managed to fit everyone in that one hall is beyond me). Floors one, two, and three were female floors and floors four and five were the male ones. The laundry room was located on the right side of the first floor. The library was a library, with a door on the right side of the room you first encounter once stepping into the building; that room was used to house the Creative Writing Class. The library connected into a tower above it, which houses areas full of enormous navy blue beanbags known as Quiet Zones. Quiet Zones are the best view on campus (rivaled by the 5th floor of McKean). These were frequently used by the From Wonderland to Hogwarts (AKA Wonderwarts) class. The dining hall, which was large and fancy, had flags from most countries hanging from the ceiling. The dining hall was shared by tipsters, girl's volleyball camp, boys' basketball camp, and Tech ID kids. This lead to much conflict. For example, once a member of The Breakfast Chaches threw a tater tot at a Volleyball girl because they had stolen all the french vanilla from the coffee machine--again. The Dining hall also housed the second Term I 2015 dance due to a thunderstorm preventing people from leaving the building, and housed all the dances in term I of 2017. The room is usually decorated based on the theme of the dance, aside from the chairs that were lined up on the sides for people to rest on and the tall tables where you would almost always see a group of kids playing ERS. There is also a small lounge area with board games and such that people would use to get away from the dance. Then there was the building which housed many of the classes, the Bush Science Center. It's also home to the auditorium, which is used for the Talent Show, Quiz Bowl, Orientation, TiPsync, and various activities as needed. Also see: Rollins College list

The very first term on the Rollins campus went pretty well. The campus was happy to have young, bright, genius, tipsters around. It was mostly a smooth run through besides one little hiccup. I guess you could say it's because of the whole fourth floor being stinkers (pun intended). The boys on the fourth floor had one guy who went the whole three weeks unnamed but will always be remembered. This kid must have had a phobia of toilets because he rarely used one. Instead this kid would do his business in other places, whether it was in the middle of the bathroom floor or in the shower, and by business I mean number 2. The first time it happened everyone thought it was a joke. All the boys on the floor were pushed to confess but none of them did. Then the second time it happened the boys of the floor got a nice talking to (I was on the third floor and it didn't sound like very much fun), and the boys had to go to bed early that night. Everyone thought it was all over, especially the boys on the fourth floor, until the day someone walked into the bathroom to take a shower and, there, smeared all over the wall, was the poop, yet again. This time the boys all had to write personal letters to their RC's telling them why they would never find it funny or TIPropriate to poop in the shower. For those boys it was somewhat of a nightmare, but for everyone else at TIP Rollins Term 1, it was the laugh of the century. Some boys on the third floor even made a rap about it.

The Breakfast Chaches have a lot of information about what went on during this term.

The link above should give you some major insight on what occurred during the second ever term at the beloved Rollins College campus. Other than those adventures listed, there were a few other quite unforgettable moments at TiP. For instance, we had the fire alarm scandal. Someone at the campus was coming out of the shower when they were pushed and stumbled into the alarm. Nobody knew this incident was an accident, of course, so the entire building was in turmoil. Each RC tried their hardest to manage their wild and chaotic group, but were unsuccessful, eventually giving up and allowing the TiPsters to leave the building in a "calm and quiet" manner with two RC's leading them safely out. They lead us to the quad, an enormous, circular patch of green grass, and waited for all the RC's to arrive, taking attendance of their own groups. There were people in their pjs, regular clothes, some with socks, others barefoot, the lucky ones in shoes, and a few unfortunate boys and girls who were only wrapped in a towel as they were in the middle of taking a shower. After a while it was confirmed that the incident was, in fact, an accident and the student who mistakenly pulled it had come forward.

There were other events that weren't as major but as a common courtesy to the history of TiP, they will be listed. There was a point in time where the fourth floor (or the fifth; I may be mistaken) was banned from playing ERS in the common room because the floor below it was sending in noise complaints; it turns out the boys were playing so aggressively that the chest was making too much noise. Another event was in which a boy named Trinton wore a dress at TiPsync to portray the fabulous Dancing Queen. There was also a famous incident in which a girl dropped her entire tray in the middle of the cafeteria and every single person stopped and turned to stare at her, and she was in tears. Her roommate, not knowing what to do, shouted "OPA!" and the cafeteria began to clap, making the girl feel much happier about the whole situation. Josh, an RC, was obsessed with whipping everywhere he went, causing a few frenzied girls to tape colorful signs inside the ENTIRE building with phrases like "No whipping allowed at this point", "Josh can't whip here", "Whipping? NO", etc. Soccer was played in the halls often.

•The Songs of TiP, played at the dances: Time Warp, The End of the World as We Know It, We Are Young, Bohemian Rhapsody, Don't Stop Believing (2017) and American Pie

•TiPsync, which in 2017 Term 1, Kelly's Jelly Bellies made people question their sexuality with their performance of, "You Can't Stop The Beat", where Mary Rudd and Sara Whitman preformed the most iconic dance move of TIP history.

•Talent Show, which gave birth to Margaret, the Ratchet Queen.

•Spirit Week, or as some called it, Insanity Week

Some things that you should (and shouldn't) bring that might not have been on the list. This is an imperative topic, especially for the first year tipsters.

-The Breakfast Chaches (the one and only)

-Bek's group (the loud ones)

-The Country Of Mingo (Only the best country ever tbh)