A tipster who used to own tipsters for life on Instagram (she gave it to Colin Stenger in ealry 2018). They live in Southern Missouri. A very very very extroverted person. She had Blonde hair with extremely faded blue in it her first year and neon pink hair her second year, third year it was faded blue ish. She started a huge intercampus Imessage group chat that is full of inside jokes and lots of smirk emojis (thanks to Wright Coffman), she also made a huge GroupMe with over 150 people that was pretty successful. The Imessage group chat was how she met her relationtip at Tech before camp which made it possible for them to be a thing from day one her second year. Her birthday is September 26th 2000. She loves forcing her friends from TIP to write her letters because she is a advocate of snail mail to a ungodly degree and she will make you send her some if you get to know her. Over the years of TIP she became gayer and more and more into memes.

Her RC was Naomy Chimenge. Her relationtip much to everyone's distaste was Bobby Carstens. Known Friends from this term: Aza, Noah Carr, Kris shelyukh, Margaret Laprarie (her roommate), Elise Null, Woody Wisz (the ship that never sailed). She Performed Love Song with Jessica, Emma, And Elise in the talent show which was only a minor disaster. She went out of her way to make friends and created the otp Krithan (Kris and Ethan) which she, to this day, is very proud of. While there her and Kris shelyukh made the inside joke "Fam with the ily" which they still reference to this day. During the first dance she danced enthusiastically with Elise over in the corner, at the second dance her and Kris got a photo of them that was featured in the term book, at the third dance she ran around trying to spend time with everyone and danced in one of those circles where everyone watches one person dance. 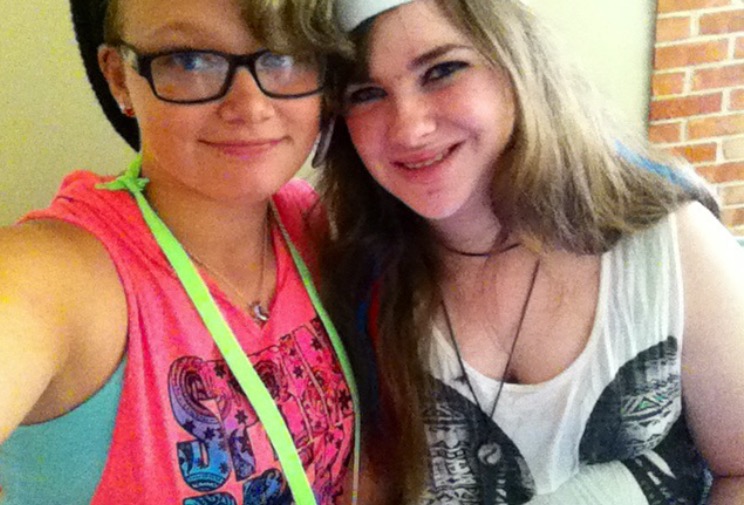 Second Year- Georgia Tech Term 2 in Through the Wormhole

Her relationtip was Bailey Burroughs and they were a thing from day one and shipped by everyone...except for maybe Hannah(Baileys RC). Her RC was Aubrey Hobby but Ham and Callie were pretty much her RC 99% of the time.Known friends were: Elise Null, Noah Carr, Emily Sallade, Gabby Herrick, Justin Broyles, Tanvi Vishwanath, Abby Filer, Elizabeth Martin, McPherson Newell, James Weichert and Naomi Hardin. At Tech she would walk up to all the TIPsters and ask "What's your sexuality???" before she even asked them their name or said hello. She also initiated Awkward Introductions at Tech as well. She performed She Keeps Me Warm with her relationtip Bailey in the talent show which was adorable. Her moms included Hamilton Way, Cheyanne Wescott,and Callie...it's a complicated family. Louanne also at one point got a box and went around knocking on doors getting pads and tampons which she then presented to Ham as a gift because he was now a mom and needed to be ready for his lady time (The box got left in the hallway and soon there were pads everywhere). 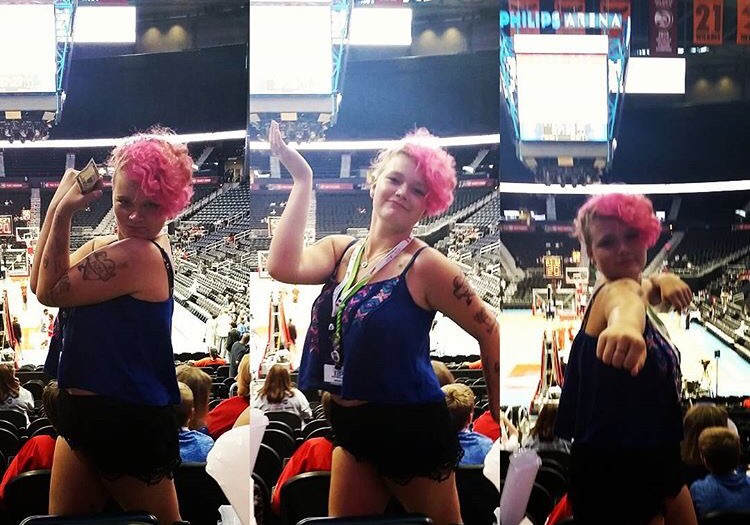 Lou and Catherine competed for the best dance proposal, Lou won. Blake almost died to everyone's horror. Lou lost her last night due to Bailey. It was a term full of drama.

I got to know Lou pretty well. She's pretty awesome. I'll find a photo of her in the coming days and upload it. You're welcome, Lou! -Christopher Tate

Where is the photo? You speak lies. ~Isaac

Lou and Catherine were all over each other 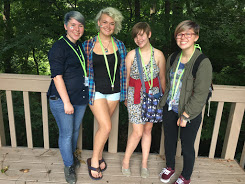 Lou and Patrick split off from Quinn, Catherine, and Blake to take Ethics and Sci-Fi. Her instructor's name was Jackie, who is a bomb, swing-dancing pterodactyl, and their TA was Giacomo Riva, a wonderful, gay Italian man. During the term, Lou and Catherine once again competed to see who could do better promposals. The results of the competition were never determined. A bottle of juice Lou gifted to Quinn was accidentally fermented and promptly disposed of following discovery of its alcoholic properties. Lou and Sarita were very sweet roommates who both grew a lot from one another. Lou's rag won first place in TiPsync with a remix of the Little Einsteins theme song. 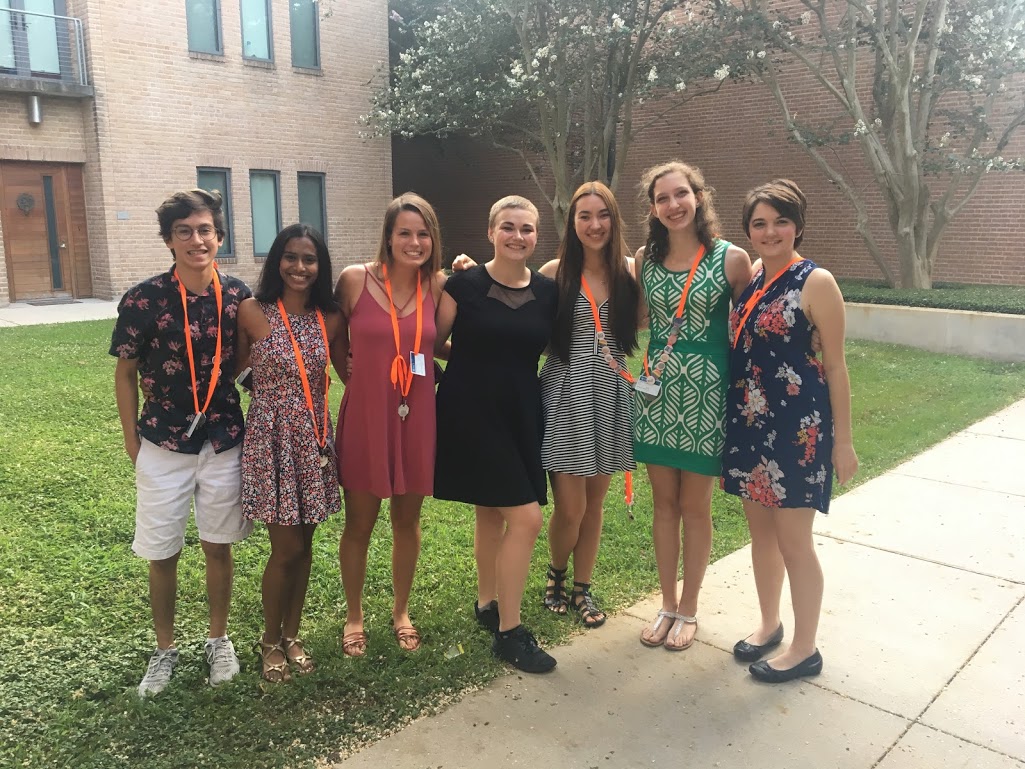 Post term Lou and Catherine came to Quinn's house and had a fabulous time. They all love each other very much.

To Giacomo I leave all of the campus squirrels. To Jackie I leave Peter Sloan. To Patrick I leave the best Boi. To Quincy I leave peace and veggies. To Catherine I leave the best year of my life. To Blake I leave homosexuality. To the fourth years who have left years before I leave my gratitude and respect. To Noah Carr I leave a friendship that will never die in my heart. To Elise Null I leave admiration and love. To Fish I leave my makeup skills. To the fourth year boys I leave my eighth of the tipsync win. To my first girlfriend/relationtip I leave the hope for a brighter future. To Kris I leave our bond that grew from trinity to now. To Chaucer I leave Tosca's rage. To Natalie, Caetana, Margaret, and Sarita I leave late night memories and my gratitude for putting up with me. To Josh I leave the gay rights movement . To the four year girls I leave my undying love and gratitude for being my secret service. To Cheyanne Wescott I leave the spirit of galactathug. To Georgia Tech I leave the memories of my canoodling. To the tipsters who didn't make it to their fourth years for whatever reason I leave my own fourth year. To Rhiannon Harp I leave some peace and quiet for once. To René Descartes I leave my undying devotion. To Connor Anderson I leave Minions and American Pie. To all tipsters who have been I leave the spirit of happiness, finally having a place where you fit and you're loved. To myself I leave the hope of a bright future filled with my friends and happiness where all of the year is good not just these three weeks.