Mark Harvey was an odd cult figure in social and political education. He started teaching Duke TIP in 1999. During the regular school year, he has taught at a number of universities around the world. He taught International Relations and also wrote the courses on Politics in Practice and World Politics: a Diplomat's Perspective. He mostly taught TIP at the University of Kansas, but in Term I 2005 taught Politics in Practice at Duke East. He has also taught two sessions of TIP summer field studies in London: one at Marymount International School and the other at the London School of Economics.

To many people, Mark has come to be known as "The Music Guy". He was originally called this while teaching TIP session II at the University of Kansas (2003-2004) where students began calling him "Mark the Music Man", or "Music Guy", for the omnipresent acoustic guitar slung over his shoulder like a weapon. He has been known to lead students in songs like John Lennon's "Bring on the Lucie"; the Beatles' "Revolution", "Hey Jude", "Across the Universe", and "Rocky Raccoon"; "Laid" by James; "American Pie" by Don McLean; "Profit in Peace" by Ocean Colour Scene; "Volunteers" by Jefferson Airplane; "Brown Eyed Girl" by Van Morrison; "I Will Survive" by Gloria Gaynor or Cake; "Hotel California" by the Eagles; "With or Without You" by U2; "1999" by Prince; "Tell All the People" by the Doors, and most famously, the Irish protest song, "The Fields of Athenry". He has shared other of his original songs such as "Never Say Goodbye", and "Snowball". "Fields of Athenry" is still sung at the Texas A&M campus to this day, carried by students who moved there from the Kansas campus when Kansas changed its format. See http://www.youtube.com/watch?v=LqIu4nQUwgI

In addition: He has been enlisted to perform at some talent shows.

- Mark and , with the help of Elizabeth O'Wong and Abbey Cannon, wrote "The Love Terrorist", a funky song which is a tribute toPeace Bear. This song has been performed at Kansas and Duke East.

- Mark and also authored the famous and annoying "Fetus Song" at the Kansas campus in 2004. They brought it to Duke East in 2005 and Mark also performed it in subsequent sessions at Kansas and in London during the 2005 TIP field study at the London School of Economics. At Duke East in 2005, the magical song was used to take over a cafeteria and more famously a class.

- Mark sings tribute songs to his TA and occasionally other staff members.

- Mark frequently travels around students' wings around bedtime to serenade the students to sleep. He makes rounds to as many wings as possible on the last night of TIP every session.

- A fan club for Mark Harvey's music has emerged on facebook called "The Fans of Mark Harvey and His Music".

The Groups and Classes

- Mark started teaching at TIP in 1999 ( and , ). He then taught Politics in Practice for the first time during second term. That course was then titled "The Science and Art of Politics".

- The year 2000 was also the beginning of Harvey's work with students in his class to mobilize the entire TIP campus around a political movement. Each session, his class selected a name for the group and they would successfully "activate" apathetic TIPsters through song, chant, and protest. These are the groups' names through the years:

- Mark did not have a group name with his 2001 TIP course taught at Marymount International School in London, also titled "International Relations" (). In content, the course was more closely akin and a prototype for his 2005 course title "World Politics: a Diplomat's Perspective").

-Mark has also started other groups through his teaching at other universities. Such groups included the Wall Banging Hairy Coos and MHSFKWCRG ( was a member of both). Other groups included Finding Neo, Freedom Fighters, the Outsiders, Bach’N IT and Synergy2. 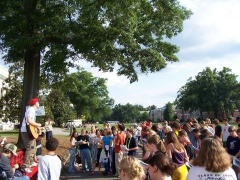 - In 2000, Mark was an elite insider in the KGBm student uprising known as the Water Balloon Revolution. Traditionally, Swampfest (known as Quadfest at Duke East) ended with an event called "Seven Seas" in which unsuspecting first years would be blindfolded and pelted with waterballoons by the residential staff. Fourth years Matt Mulling, Steven Martino, and consulted with Mark, Geoff Peterson, and RC John Condra to turn the tables on the RCs and pelt them with water balloons instead. Mark worked behind the scenes with OSC Rob Van Cleve and RHL Maria Carter to provide the water balloons and protect the students from punishment by the upper administration.

- In 2002, the IRA led the "Genius/Athenry" singalong while waiting for the RCs to set up the slideshow at the end of the session. This became a rough model for "rallies" in following years. On most occasions, these rallies never had an explicit political purpose but were designed to fight student apathy, break social structures, and give his students and opportunity to develop their political skills. The 2006 group, Kingdom of Sweden, made further innovations when they dressed up in masks of George Bush, Ronald Reagan, Al Gore, and Bill Clinton to attract TIPsters to the rally. The RPP subsequently attracted attention by donning bunny ears as a publicity ploy.

- When some members of the Heretics believed (incorrectly) that Mark's job was in jeopardy, they rallied together, developed a passive resistance and civil disobedience strategy where they threatened to shut down TIP at Kansas until Mark was restored to his position. Apparently it was just a rumor and Mark was never in danger of losing his job. However, for their efforts, they began to refer to themselves as the "Free Mark!" group.

- During the second session of TIP at Kansas in 2006, the RPP organized a legitimate political rally for a specific purpose: to raise awareness and pressure the government to allow former Black Panther and political dissident Assata Shakur amnesty and safe return to the USA. The brainchild and primary organizer of the rally was Kaelin Ross, who decided to turn her activism class project into a real protest. She, with the help of Katie Porter and Anh-Ton Tran inspired about sixty TIPsters to show up at the event. A number of them signed a petition to ensure her safe return. The group also performed a song written by Kaelin and Mark called "Bring Assata Back".

-In Session 1 of 2007, Mark supported a student-led anti-censorship campaign in which the majority of students wore black, taped "censored" signs to their shirts, and took vows of silence in response to a ban on cross-dressing. While Mark expressed sensitivity toward those who supported the ban, he also supported the right of students to express their discontent peacefully.

After teaching first term at Duke East in 2005, he led a group of TIP students to London. They arrived in the airport just minutes after the London Underground bombings which shut down portions of public transportation for days. They did finally make it to their dorm/residence, but only after many trials and tribulations and an encounter with the London Metropolitan Police. Mark and his group, CATALYST, persisted despite this challenge as well as a second attack only a couple of weeks later, part of which occurred a block or so up the road from their dorm. Really, the event had very little bearing on their trip, although Mark did use the event as an emotional teaching opportunity.

- Markism refers to beliefs held by Mark that he tells his students that they are free to ignore. For a long time, no one knew exactly what Markism is because no one really bothered to write it down. People became Markists because they knew it was something good...something that had to do with loving others and serving others. These are a few or Mark's principles that have subsequently written down by former students:

- Former TIPsters who were in Mark's class (or wish they were) often still refer to themselves as "Markists". A facebook group of Markists has also recently sprung up called "Markism...a Home for Markists". Notable followers of Mark who were never in his class include , , , , , Tess Schlaer, Svusch Linkous and many others.

Man of the People

- Since first appearing at TIP, Mark has been known as a "man of the people", or the students, sitting with them at meals and during free time. He consistently asks before joining a student table, "Can I sit here? I don't want to cause you to lose cool points because you're sitting with a staff member."

- Mark has been known to inspire students to chase bunnies.

- Mark is often seen wearing unusual costumes such as a red beret, an Arab headscarf and Egyptian clothes, a furry Russian hat and Soviet era gear, bandana and tye die outfits, or provocative political t-shirts, just to get a rise out of students.

When Mark moves from one campus to another his absence the following year is noticeable and crazy stories sometimes emerge. At Duke East in 2006, stories circulated about Mark's activities the previous year--stories that were in all likelihood exaggerated into Paul Bunyan-like legends. "Did you hear about the crazy activist teacher who ______?" (Fill in the blank). He certainly did not overthrow the TIP administration, although the National Cupcake Club did stage a successful rally that involved most of the students and staff and even some counterprotesters, they did invade a Writing With Power class and they did electrify a cafeteria with performances of the "Fetus Song". Even some 2006 Duke East instructors took part in the exaggeration. One referred to Mark as "the communist guy". Mark is a Markist (see Markists), not a true communist. Apparently some students returned to a politics class at Duke East in 2006 expecting Mark to be the teacher. Their potential disappointment caused the new politics teacher to preempt the students on the first day when he reportedly insisted "I am not Mark Harvey!"

While many myths and legends surround Mark, and many are unconfirmed, these are some of the more common ones:

- Mark claims that one of his superpowers is immortality, a power that resulted from a mysterious incident in the Isle of Skye in Scotland. Apparently he was coaxed into immersing his face into a cold stream at Sligahan, which he believes gives him immortality and eternally youthful good looks. His wife, Kimberly Harvey, reportedly believed that the whole thing was a crazy story intended to get Mark to stick his face into a stream on a nearly freezing day. Before becoming Mark's TA, also was given the chance to engage in this ritual, but refused to participate on the grounds that it was just that. However, we'll see who is laughing when Ben gets his first grey hair, and Mark still looks thrirty.

- Mark's other superpower is that when he holds very, very still, he becomes invisible.

- Mark has been said to creep some people out with his uncanny impression of a fetus.

- Some believe Mark's "power animal" is the hairy coo, or Highland Cow of Scotland. Mark has never revealed what his real power animal is.

- Mark provides the current home for Peace Bear, the white flying stuffed bear that originally lived with , and spreads love and joy throughout the land. Legend has it that Peace Bear became so beloved by Mark's 2004 International Relations class at Kansas that he gave the bear to Mark so that he would forever spread love and joy to TIPsters for many terms thereafter.

- Mark is an Eagle Scout.

- Rumors have it that Mark's 2004 Free Mark / Heretics group (Politics in Practice class) was investigated by the FBI because of their political protest music, their bold display of a Saddam Hussein chewy toy, their terrorist costumes, and their shouts of "Free Saddam!" Mark is also believed by many to be watched by US military intelligence, the CIA, Mi5, Mi6, and other government agencies for his past student activism, his contacts with international political activists, and his revolutionary teaching methods at TIP.

Mark's courses feature class mascots that act as class disciplinarian. Here are some of the mascots.